Community Against Hate, a diverse coalition of community organizations and leaders have teamed up with the national civil rights organization NAACP in a clear stance to address hate directed toward Asian Americans and Pacific Islanders.  In a direct response to the increased verbal and physical attacks against Asians living and born in America, the #UnityAgainstHate rally will be held on Saturday, May 15, at 11…

THE CALIFORNIA AFRICAN AMERICAN MUSEUM PRESENTS ‘RHYTHMS OF VISIONS: THE ARTISTRY OF OVERTON LOYD’ THROUGH SEPTEMBER 18, 2016 The California African American Museum (CAAM) will host a free event for children with special celebrity book readings, writing workshops, art and more. Heads Are Turning, Children Are Learning Literacy Day will take place on Saturday, May 23, 2015 at CAAM from 11:00 a.m. to 4:00 p.m. Actor Donis Leonard Jr. from Showtime’s House of Lies will…

A Discussion with Ed Lewis, Co-founder of ESSENCE Magazine will discuss why he and three other men wanted to give black women a “voice,” and to depict their various facets of beauty, intelligence and passions.  He will share the unique journey of founding Essence and his take on the modern “Beauty Culture” as it relates to black women.  The program will be moderated by Kathleen McGhee Anderson, pioneering writer of television, stage and film.  RSVP at 213.744.2024. CAAM exhibitions…

Young Voices at CAAM--High School Symposium: Vote for your life!

100 high school students will spend the day at CAAM- touring the exhibits, making connections and discussing how the power to vote is integral to the maintenance of our civil liberties. For more information contact ewoodson@caamuseum.org.

The California African American Museum’s (CAAM) Target stage is moving  to Expo Center at the CicLAvia Expo Park hub of activity on Sunday, December 7, from 12 p.m. to 2:30 p.m.  CAAM is partnering once again with CicLAvia and ASCAP, along with Expo Center in celebration of their 10th Anniversary.

CicLAvia is a neighborhood celebration that closes city streets to cars encouraging people to walk, skate, or bike along a mapped route. This will be the first time CicLAvia's route will…

FILMS AT CAAM – BEHIND THE VEIL FEATURES FILMS HIGHLIGHTING A POLITICAL SCANDAL, NATIONAL CRISIS AND DREAMING WHILE BLACK

One of the California African American Museum’s (CAAM) signature programs is Films at CAAM, which screens mostly first run, thematically linked, award-winning and critically-acclaimed documentary films during the months of April, June, August, and November.  November's Films at CAAM presents its series Lifting the Veil, showcasing several films throughout the month that reveals the truth and aftermath of a political sandal, a national crisis beyond one company and…

EXCLUSIVE OFFER - "THE TRIP TO BOUNTIFUL" LIVE AT THE AHMANSON THEATRE The California African American Museum (CAAM) presents its Target Sundays program, A Caribbean Musical Potpourri—collectively showcasing the island favorites of Reggae, Calypso, Soca and Latin American sounds.  This event will take place on Sunday, September 7, from 11 a.m. to 4 p.m. and will be co-hosted by the multitalented singer and actress Dawnn Lewis as well as actor Jeffrey… While addressing the issues of myth and tradition within albinism, the California African American Museum’s… 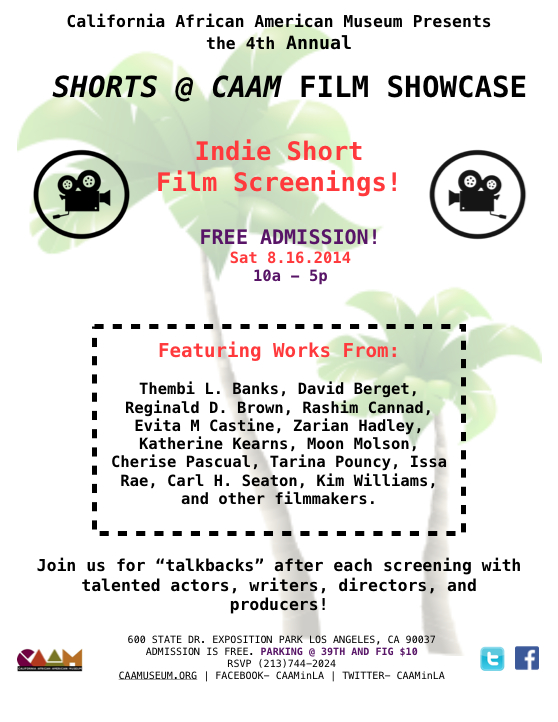 The California African American Museum (CAAM) invites the community to attend CAAM’s fourth annual Shorts at CAAM, in a one-day only event, Saturday, August 16, 2014, from 10:00 a.m. until 5:00 p.m.

“CAAM is excited to present to the community, the next generation of talented filmmakers,” says Woody Schofield CAAM’s deputy director of operations and…

SONGTRESSES TERRY DEXTER, TREASURE DAVIS AND ANTONIQUE SMITH TO BE FEATURED AT TARGET SUNDAYS AT CAAM The California African American Museum (CAAM) encourages all independent filmmakers to submit their short films to be featured in CAAM’s fourth annual Shorts at CAAM. Directors, producers, writers, actors, and editors will be given the opportunity to showcase their work to new and diverse audiences, and speak about the creativity that sparked each film. Shorts at CAAM begins Saturday, August 16 through Sunday, August 17, from 11:00 a.m. to 4:00 p.m. Submissions accepted will…

CELEBRATE THE FOURTH OF JULY AT THE CALIFORNIA AFRICAN AMERICAN MUSEUM WITH COMEDIAN D’LAI, FOLLOWED BY EXPO PARK’S FIREWORKS EXTRAVAGANZA

The California African American Museum will celebrate America’s birthday with Gleaming at Twilight for its Target Sundays at CAAM program, on Friday, July 4th, from 6 p.m. until 8 p.m.  Co-hosted by comedian D’Lai and actor Jeffrey Anderson-Gunter, the event will be followed by Expo Park’s annual Fireworks Extravaganza, coordinated by the offices of Councilman Curren Price of Council District Nine.

The California African American Museum (CAAM) kicks off its annual celebration of Black Music Month in partnership with the American Society of Composers, Authors and Composers (ASCAP) for Target Sundays at CAAM with “Music Madness.”  On Sunday, June 1, 2014, from 1 p.m. until 5 p.m., CAAM’s Courtyard will be the venue for this upcoming musical celebration, headlined by the dynamic and critically acclaimed RCA Records artist Mali Music.  Other performers include Maad Moiselle, BJ The… 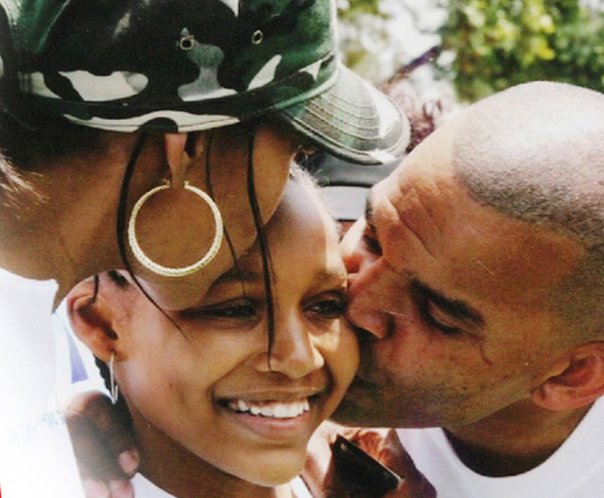 (Los Angeles) BrittiCares International, a 501 (c)(3) nonprofit organization, invites Southern California to join in on their race against cancer and the despair and heartache is causes, as they host their 9th annual Brittiana “Smile For Life” 5k run/walk.  The time-chipped race, will take place on Saturday, June 7, from 9 a.m. until 1 p.m., at Kenneth Hahn…

LOS ANGELES (April 30, 2014) Join the California African American Museum (CAAM) and enjoy the beauty of spring with Cross-Cultural Afro Influences during Target Sundays at CAAM, May 4, 2014, from 1 p.m. until 5 p.m. Co-hosted by actor Jeffrey Anderson-Gunter and actress T'Keyah Crystal Keymah, the program will include special tributes to mothers and the history of Cinco de Mayo.… Los Angeles’ only book festival that focuses exclusively on the local community, the second annual Grand Park Downtown Bookfest offers Angelenos of all ages access to the largest coalition of Los Angeles-based presses and publishers in an outdoor bookstore setting.  The free Bookfest provides a platform for writers and budding authors of all ages as…