The Healthy 'Hoods series looks at the health and economic consequences of park equity in Los Angeles. Findings suggest deliberate city planning led to a segregation of the poor and parks, leading to higher obesity-related illnesses, such as diabetes, and related health-care costs. The story was produced in collaboration with the California Endowment Health Journalism Fellowships, which are administered by the USC Annenberg School. 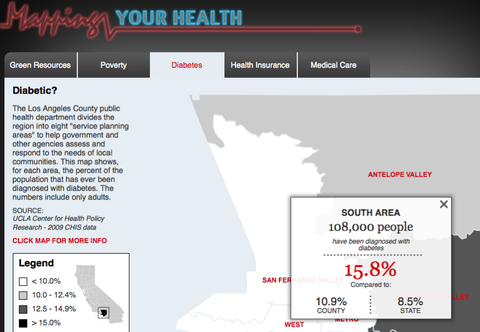 Follow up: Starting in South LA, 50 new parks to be built in Los Angeles

This project was made possible through the support of the USC Annenberg Health Journalism Fellowship program, funded by the California Endowment.

LeimertParkBeat.com and SoCal Connected partnered to produce this series.

The Heliocpter Hella Loud series looked at the impacts of helicopter noise – police, media and tourist choppers – on the mental and physical health of residents. The Los Angeles Police Department has the largest air unit in the country and use the noise of the helicopters for crime supression. The helicopter are note used solely for serious crimes, but also vandalism and to make their presence known. Crime is down, but the noise is up.

UPDATE: Less than a month after publication, stories on the issue were written by the New York Times, Los Angeles Times and the Los Angeles Daily News, and a L.A-area congressman announced he would sponsor legislation to reign in helicopter noise.
Click here to launch interactive graphic by Brian Frank

Part 1 - Helicopter Hella Loud: A Look into the Noise Above Angelenos.

This project was produced in partnership with KCET-TV and funded in part through community contributions raised with the help of Spot.us.

The Urban Economy report highlighted dozens of studies over the years that independently assessed the economic health of South Los Angeles. The diagnosis: South L.A. has less crime, more buying power and a lower office vacancy rate than many parts of the city. “The results are surprising,” wrote Jack Kyser, the dean of economic development researchers in Los Angeles. Many developers aren't taking the chance, but that's beginning to change.

Urban Economy 411 - Reputation, not the facts, may be biggest hurdle to economic investment in South L.A. The work was funded in part through community contributions raised with the help of Spot.us.

UPDATE: A year later, signs of progress were visible as demolition of the center - the size of 20 football fields - finally began in earnest. Part 1 - Redevelopment Hell: How a prime opportunity for redevelopment in South Los Angeles became the bane of the community.

Follow up - The Hope of Marlton Square / Santa Barbara Plaza

Leimert Park Beat and Intersections: South LA Report partnered to produce this report and it was funded in part through community contributions raised with the help of Spot.us.

I caught a straight up vibe with this song. The intro led me into euphoria leading up to tha chorus dropping. It's tha…See More
Jan 29
0 Comments 1 Promotion