If you think we deserve easy access to FRESH PRODUCE in our community say, "ME"!!!  Opportunity is knocking---read below about the a program that will help convert some of our local convenience stores into markets that carry fresh produce. I hope that you will take the time to get involved and spread the word!

The Best Burger in Leimert....

HAPPINESS is... the Cheese Burger Special at O'so Juicy N'Tasty.  The name says a lot and the first bite truly proves it all. Your mother couldn't make a better burger in her own kitchen. And this is by no means Fast Food. Miss Cookie, the owner, is a sweetheart and makes everything with love.  …
Continue

Visual Mural Tour created by MCLA as part of the Places of Validation, Art &Progression at CAAM

From 1940-1980 numerous murals were created by African Americans in Los Angeles. The Mural Conservancy of Los Angeles (MCLA) has created a Virtual Mural Tour for the California African American Museum (CAAM) as part of the Places of Validation, Art & Progression exhibition (a Getty's PST initiative). We are grateful to all the…

Revitalization of the Slauson/Overhill Corridor 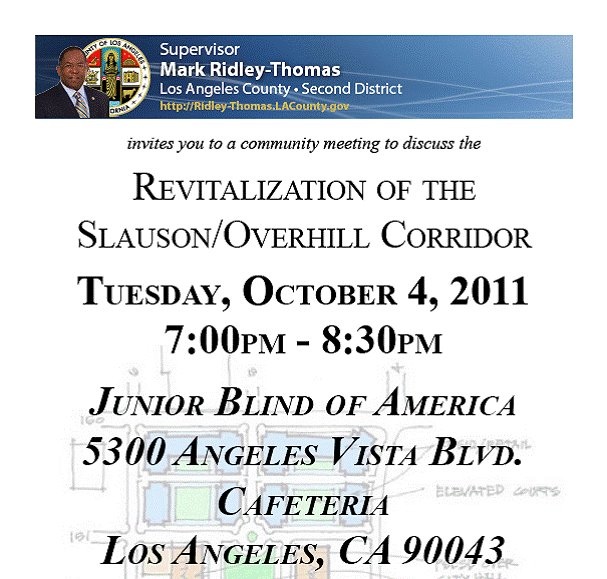 Thank You To Leimert Park Beat

What a wonderful event on Sunday!  We were happy and honored to Solar Power the event and look forward to many more. See photos at end of post.

We are now giving free Green Courses, including:  Solar, Permaculture, Waste Management, Wind, Aquaponics, Bio Fuels and Water Managmen. The mandatory Introduction Courses are held for the next…

Once Again Nader and West Team to Elect a Republican President

The American People Are being Flimflammed, Bamboozled, and Hornswoggled by the

The American People Are being Flimflammed, Bamboozled, and Hornswoggled by the
GOP
.…
Continue

Urban Hikes
with
Leimert Park Beat.com
Stocker Corridor Trail
Sunday, October 2 at 10 a.m.
This approx. 2.5-mile round-trip hike winds its way on a dirt path along the hillside beneath the lovely homes of View Park for great views of the L.A.…
Continue

One-Thousand Plus and Going Strong John Coltrane's "A Love Supreme" softly resonates on a Sultry Sunday afternoon in the heart of Leimert Park at a green and calm forum neighboring  Ackee Bamboo Jamaican Cuisine. People began to come in, greeting each other and settling into the good vibes surrounding the grounds.

This was no ordinary day in Leimert Park. The balloons, smiling greeters and…

I was honored to be asked to be a project adviser last month for a USC masters class in Specialized Journalism. USC Professor Sasha Anawalt invited some of my favorite journalists in Los Angeles to lead students to cover a topic in depth yet quickly with a video camera. The journalist…

A SHIP is designed to take you places... So if your friendSHIP,partnerSHIP,companionSHIP or relationSHIP isn't taking you anywhere its best you abandon that SHIP

How Do Politicians Get People to Vote Against Their Own Interest?

How Do Politicians Get People to Vote Against Their Own Interest?
.…
Continue

THE GOAL:  Make Leimert Park Village the "one stop" for all Green news, products, education, etc. for Los Angeles.   There isn't one yet and create a self sustaining village than can also be a base for Emergency Response in times of need.

WHAT WE HAVE;  Free Green Courses on all subjects 3 days a week (and Childrens Afterschool classes),…

Attending the regularly scheduled Neighborhood Council meeting I discovered we have a lot of work to do. Be that as it may, an opportunity does exist for the legacy of our community to step-up our game and lean forward n2 the 21st Century.

**The vacancies that were open on the Board for Area Rep and At Large Representative were filled by unanimous consent. The vacancies for Treasurer and Planning & Land Use were not…

Channeling FDR: The Moral Case Against Unemployment: My last weekend in D.C. provided a final chance to enjoy my favorite haunts. And so I found myself walking ... through the FDR Memorial, where I stumbled across the ... message below. ... A reminder, if you like, of why we care. ... If my…

"TOO BLACK TOO STRONG"

"TOO BLACK TOO STRONG"

Too Black Too Strong!!!
Was the greeting I received when I returned home…