When the beloved Magic Johnson Theater closed last year there was a palpable worry in the Crenshaw community that it wouldn't be replaced.

Many breathed a sigh of relieve when we could see demolition and construction starting in the fall. And right on schedule, and meeting all…

Despite the fact that fireworks are banned in Los Angeles and many of its sister cities, they really know how to do the Fourth of…

Helicopter Hella Loud, Part 1: A Look into the Noise Above Angelenos

The ghetto bird is out ... what is going on in my peaceful neighborhood #LeimertPark - OakBGirl on Twitter

This is part one of a series about helicopter noise in Los Angeles. Read… 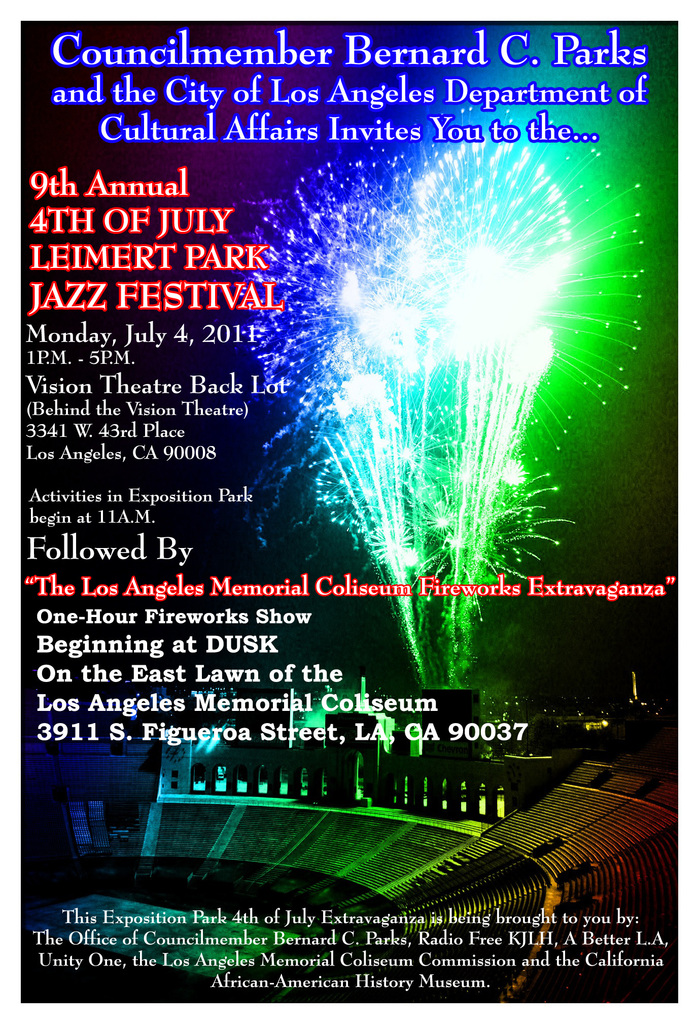 Celebrate the universal power of drumming!

All tribes are invited to a spirited global celebration of drumming. Hear musicians perform blends of traditional and contemporary…


Find more photos like this on Leimert Park Beat… As featured in the LA Times and Good Magazine ...

LACommons will be having a mask festival,

Branki Kane tweeted she'll be there - but is that just a rumor?

It wouldn't be far…

A Zionist’s Response to “What’s the Difference Between Zionism and Racism?”

A Zionist’s Response to “What’s the Difference Between Zionism and Racism?”…

I found a stray dog yesterday and took him to the South LA shelter.  He looked like a husky mix, and neighbors told me he'd been hanging around 4th Avenue for at least a few days.  His fur was gray, with a white belly.  He had a collar but no tag or microchip.  If his owners don't claim him, he'll be available for adoption on Friday:…

President Obama: What's the Difference Between Zionism and Racism?

President Obama: What's the Difference Between Zionism and Racism?
…
Continue

Cherrywood/Leimert Block Club organized a region-wide block clubm meeting on Saturday, June 18 at Transfiguration Catholic Church Parish Hall on King Blvd
"We hope to help network some of the neighborhood groups and to see how our club fits into the bigger picture," Marcia Arnold, president of Cherrywood, wrote in an email.
I am represent Sutro Ave. this a.m.…

An appeal has been filed with with the Zoning Administrator objecting to the issuance of a Conditional Use Permit (CUP) which will allow the future Fresh & Easy at 52nd and Crenshaw to sell beer and wine, as nearly all other full-service grocery stores do. Regardless of how you feel about alcohol, our community needs more fresh,…

I finally got my blog up and running.

It's called Living in Leimert.  I wanted to share my thoughts with all of you.

Check it out and enjoy:

Saving to buy your first house...where do you start?

To all my first time home buyers---

The days of 100% financing have BEEN gone!  You must have at least 3% of the purchase price of a home as your down payment.

Next to correcting your credit, saving for a down payment is probably one of the hardest things to do when it comes to buying your first house.  It all boils down to changing…

The Music Center’s Dance DTLA series is back for a full season of dancing under the stars on Jerry Moss Plaza at The Music Center most Friday nights this summer! Eventgoers can dance the night away to various dance styles from June 3 through…See More
21 hours ago
0 Comments 0 Promotions