He says just because at-grade crossings were forced upon the communities of color from Leimert Park to University Park doesn't mean that anyone should consider this the new standard to justify putting at-grade crossings in the more affluent and whiter areas closer to the beach. 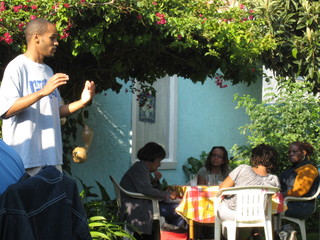 CityWatch published a piece he wrote titled, "Distorting Environmental Justice is an Injustice."

"The objective of environmental justice laws is to raise the environmental standards, quality of life and participation in the decision-making process for minority and low-income communities, not to lower them for non-poor Caucasian communities," Damien says. "To realize this, one need only extend the practical application of our opponent’s misinterpretation of environmental justice: building a large polluting port in Malibu would be justified by the presence of one in Wilmington, building a landfill in Beverly Hills would be justified by the one in Sun Valley, etc. Such arguments are clearly illogical and contrary to the objectives of the environmental justice movement, which is rooted both in the cause of civil rights and environmental protection."

Damien, who attended the this summer's Sutro Avenue Block Club barbecue at my house, accuses the
MTA of trying to pit communities against one another that should share concerns about safety, traffic and community impacts

via Twitter
RT @MichelsonPhils: Read our latest newsletter for updates from the #Michelson network of foundations, highlighting developments in #medica…

The Emmy Award-winning “L.A. County Holiday Celebration,” a Los Angeles holiday tradition since 1959, joyously returns to The Music Center’s Dorothy Chandler Pavilion to celebrate its 62nd anniversary with a…