Expo Line on way - with bridge at Dorsey. LPB member still fighting for bridge at Foshay.

The LA Weekly highlights Leimert Park Beat's own Damien Goodmon and his fight to make the Expo Line Light Rail safer no matter the cost.

The MTA’s Expo Line starts in downtown LA, shoots down Flower and heads west on Exposition all the way to Culver City and - one day - to the ocean.

Be a marketing representative for BET, the No. 1 cable network for African Americans!
Get your application below and apply now!

Hassan Khan - From Chicago, to Los Angeles and Back

I had the priviledge of meeting Hassan in the mid 80's when I lived in Hollywood, California and as fate has it, our paths crossed again.

He now lives in Chicago and has been there since the late 80's, but Hassan's history goes back to the mid 60's when this master bass player, at the time in his teens, was playing with "The First Family of Soul" The Five Stairsteps, best known for their 70's song O-o-h Child.

In the early 70's Hassan was playing with another legendary… Continue 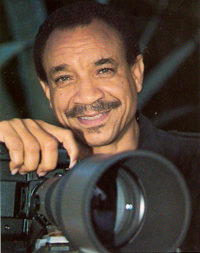 He was born in St. Louis, Mo. under the zodiac sign of Virgo. As one of four children, he only dreamed of playing baseball and pitching for the Cardinals was the fastest way he knew to escape the poverty.

"Maybe even try my other fascination, the art of photography... I was lucky enough early in my career to… Continue

James E. St.Clair (aka The Artist Saint) is an award winning South Carolina Low Country artist. Many of his paintings depict the rich heritage and culture of the Low Country and the Sea Islands. Steeped in history, Saint’s visual stories tell tales of work, humor and adventure. He primarily paints with acrylics on many surfaces, including canvas, paper, clayboard,… Continue