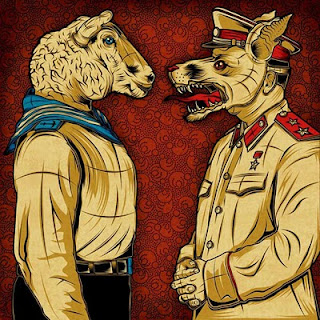 There are two types of people who support president Obama. There are his supporters who want to see him be a success, and then there are the cheerleaders who simply go along with everything that he does and deeply resent his supporters who don't.
.
The president's supporters understand the importance of remembering that in a representative democracy the president, and all politicians, are elected to serve the people, and not vice versa. They understand that all politicians are employees, and their primary job is to represent and protect the interest and principles of those who hired them. Thus, when we place the importance of any one man above our own principles, we create a dangerous situation by corrupting the intent of our founding fathers, and turning the democratic process on its head.
.
Cheerleaders on the other hand, tend to be followers - or loyal subjects, as it were. Instead of thinking for themselves, they tend to fall so deeply in love with individual politicians that they depend on those politicians to think for them. That's exactly what the founding fathers sought to avoid, because it creates a political class free to wheel-and-deal without any oversight. It also sets the people up to be demagogued, where politicians cease acting in the people's best interest, and begin to place their own interests before that of the people who elected them.
.
That's exactly why this country is dysfunctional today. We've embraced a cheerleader mentality that's made it much easier for the people to be exploited by special interests. Under the current paradigm instead of special interests having to con an entire population, they simply have to corrupt a small handful of men. That explains why money is the life's blood of our political system.
.
Independent thinking Obama supporters play an important role in Obama's presidency. Much like the checks and balances of our three branches of government, actively vigilant Obama supporters prevent him from straying too far off track. Cheerleaders, or the other hand, tend to forget that no matter how well-meaning, Obama is isolated in Washington. He can't simply go out on the street and get a feel for what the people are thinking like we can. He has to rely on the advice of the political establishment, and much of that advice is tainted to meet the establishment's agenda.
.
As important and as brilliant as President Obama is, in Washington, D.C. he's in the position of a billionaire confined to a harlot's den. He's getting a lot of advice from a lot of seductive people, but much of that advice is designed to politically enrich those who are giving it to him. It is up to those who truly support him, therefore, to keep him focused, and help him to navigate a totally corrupt environment.
.
George W. Bush's more sensible supporters found that out the hard way. Had they not allowed themselves to become cheerleaders and completely drowned out by Washington's special interest groups, vice-president and military/industrial lobbyist, Dick Cheney, wouldn't have been able to destroy Bush's presidency. Bush himself seemed to recognize that in the end. That's why he refused to pardon Cheney chief of staff, Lewis 'Scooter' Libby, and became estranged from Cheney toward the end of his presidency.
.
So it's very important that Obama supporters speak out loud and clearly so we won't be drowned out by the Washington's special interests. In the final analysis, we're the only one's he can depend on to tell him what he needs to hear as oppose to what's convenient for him to hear.
.
As Edward R. Murrow pointed out during the McCarthy era, "A citizenry of sheep begets a government of wolves." That's as true for presidents as it is the public at large. It is incumbent upon all Obama supporters, therefore, to speak out when they see him veering off course. By doing so, we protect our president from Washington's wolves, and prevent him from becoming a part of the flock.
.
As we've mentioned before, sometimes with even the greatest of men, we must drag them up Mt. Rushmore kicking and screaming.

I understand exactly what you're saying.  But cheerleading is a form of close-mindedness as well, because it is the antithesis of independent thought. And we must always meet ignorance with efficient thought, regardless to how tempted we are to circle our wagons.

And there's another thing.  We're kneed-deep in a class war, and due to our 40 years of apathy we've allowed our representatives to become a class within themselves - the political class, which is a subset of the corporate class that we're fighting.  So eventually they're going to groom a ringer that's just as intelligent, affable, and charismatic as Barack Obama.  Then if he reaches the presidency and we love him so much that we refuse to accept the facts before our lying eyes, we'll be doomed.

That's why I never allow myself to become too enamored with ANY politician.  I support them on a day-to-day basis, based on what they DO, not what they say.

Very nuanced take. And I wholeheartedly agree - we should scrutinize our leaders, even as we support them.

The Bush-Cheney example is a good one as Bush almost became a sympathetic figure.

Yet even though many conservatives ended up breaking off their love-is-blind following of both of those leaders, they are so close minded as America tries to move forward. That makes it hard not to be a cheerleader in reaction to the opposition Obama engenders whether his position is liberal, centrist, business friendly or a compromise.