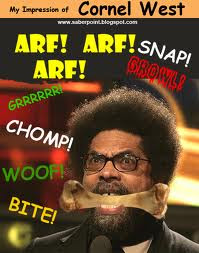 I thought I was done discussing the illustrious Dr. Cornel West, but he just won’t seem to go away. But that’s ok, because he’s serving a useful purpose. The Cornel West saga has served to open the eyes of many in the Black community to the petty, self-serving agenda of many of the so-called Black intellectuals, and none too soon. The time is way past due for the Black community to wake up to the fact that the only intellect that they can truly depend on is their own.
.
But once again Dr. Boyce Watkins and many other Black scholars are running to the defense of Cornel West, trying their best to defend the indefensible. The question is why? Is it really a matter of principle or are they actually trying to defend their stature in the Black community? Are their efforts actually an attempt to cover up the fact that many within their ranks are absolute idiots? If that's the case, they might as well give up because, thanks to Cornel West, the cat is out of the bag, and I'm loving it.
.
But yes, Boyce Watkins has written yet another article in defense of Cornel West for Your Black World - “Dr. Boyce: Tom Joyner’s Tasteless Assault on Tavis Smiley and Cornel West.” As the title suggests, Watkins still doesn’t seem to understand that there is no difference between an ad hominem attack on the character of President Obama, and the same kind of attack on Cornel West. He seems to take the position that an attack on the character of the president is a “critique,” whilet an attack on the character of Cornel West is grossly unconscionable.  Go figure it.
.
As a columnist I’ve become accustomed to seeing that kind of convoluted thinking, so I simply use it as grist for my mill, but what concerns me are those who rely on the efficient thought of the scholars who engage in it. After all, if you look up to those who constantly engage in inefficient thinking, you’re going to become a flawed thinker yourself, and that’s a big problem, not only in the Black community, but in America as a whole.
.
Here’s an example. One responder to Dr. Watkins’ article said the following:
.
“Dr. Cornel West is easily twice as intelligent as Tom Joiner (sic). In fact Dr. West is a genius and Mr. Joiner realizes this.”
.
What evidence does the writer have to substantiate that statement? Absolutely none. Like many of us, the writer is confusing literacy with intellect.  Intelligence is the capacity to assess and creatively manipulate information that literates merely regurgitate.  Thus, all the writer could possibly know with respect to the relative intelligence of West and Joyner is West's propensity to regurgitate.  He knows absolutely nothing regarding Joyner's ability to assess and process that information. So the writer's thinking is flawed, just like the people he apparently relies upon for his information.
.

He’s simply another victim of Cornel West’s corporate sponsors. As I’ve mentioned before, Cornel West is a Harvard-anointed preacher - period. So the writer is only assuming that Cornel West is more intelligent than Tom Joyner because West has been given the accoutrements of alleged knowledge, wisdom, and intellect that the puppeteers confer upon the people they handpick for us to listen to.
.
Even as Cornel West runs around ranting about the corporate “oligarchs and plutocrats” he’s wallowing in the benefits and privilege that those very same people have bestowed upon him. Clear evidence of that is West’s outrage at not being given preferential treatment for inaugural tickets over the guy who “carried my bags.” In spite of all of West's many claims of being a man of the people, he clearly betrayed an arrogant sense of entitlement and superiority over the working class.
.
His defenders try to fluff that off as an inappropriate slip of the tongue, but it’s much more than that. What they’re characterizing as a slip of the tongue actually represents a rare, if not unprecedented, opportunity to see the innermost thoughts of a demagogue. West's remarks clearly revealed that he thinks he’s above the average working-class American - Black or White.
.
The reason that West feels so entitled is because he plays his role so well. The corporate manipulators need people like West. All of his rantings gives the people a sense that help is just over the horizon. That “keeps hope alive,” and thus, the people from rebelling in the street. So people like Tavis, West, and a lot of others who we think we can depend upon play a very important role in our subjugation.
.
In order for the manipulators to control our minds and behavior they create symbols that tell us who’s been certified for us to listen to. Then, in order for us to clearly identify who’s been anointed, they give them robes, uniforms, badges, and titles that either look or sound impressive. If it weren’t for those symbols we wouldn’t know the "anointed ones" from any other fool running off at the mouth. My son is a federal agent, and I'm sure that when he walks up to people and pulls out his credentials it scares them to death. But to me he's still that little boy who used to come cuddle up next to me at night because he was afraid of the dark.  Think about it. How much reverence would you bestow upon a judge who was sitting behind the bench in a jogging suite?
.
So I suggest that people really start listening to Cornel West. I’ve been doing it every since he betrayed his ignorance by allowing Tavis Smiley to stick his hand in his back and sit him on his knee. A truly intelligent man wouldn’t allow that to happen, because he’d understand the value of integrity and independent thought - and he especially wouldn’t allow someone like Tavis Smiley to control him, because from what I see, Tavis is far from an intellectual giant.
.
I specialize in the use of words myself, so I have a pretty good understanding of their power, meaning, and the way they can be manipulated to mislead. So when I started listening to Cornel West intently, it immediately became clear to me that he specializes in stringing a lot of impressive sounding phrases together that don’t mean a thing. It takes West twenty minutes to say what any reasonably intelligent person can say in one short sentence.
.
The reason for that is, West’s primary intent is not to inform but to mislead less than critical thinkers into thinking that he’s saying something significant. He uses a lot of convoluted phrases and multisyllabic terms that never resolve into a cogent thought. He uses that technique so people who are unsophisticated in the use of words are so impressed by the sound of the words that they don’t recognize that he’s using them to camouflage the fact that he’s not saying anything.
.
When I listen to Cornel West, he reminds me of when I was a young musician. We all loved John Coltrane, because his mind was so quick and he strung so many musical ideas together so fast that his music was extremely busy. That’s why so many of us used to try to emulate him. I got to be very good at it, so the guys on the block who loved jazz but had little or no formal musical training thought I was a young genius. But what they didn’t understand was there was a huge difference between me and John Coltrane - Trane was actually saying something, while I was just making a lot of noise.
.
That’s Cornel West. The wooly hair, the shaggy beard, the over-the-top, super-cool demeanor, it’s all affectation. He wants us to think that he’s so deeply avant-garde that he’s hard to understand - that he’s the Ornette Colman of academia. But the fact is, he’s just a brother who makes a lot of noise and takes a very long time to say very little.
.
Listening to West is like eating rice cake – you can feel it in your mouth so you know you’re chewing something, but it has absolutely no taste or substance. You might as well eat the box that it came in - and the fact that so many other so-called intellectuals can’t seem to see through Carnel West renders them equally suspect.
.
So I strongly suggest that before people go running headlong into this corporate-sponsored mind control, that they stop and ask themselves one very simple question: Can I think of any memorable concept or phrase of any significance that originated with Cornel West in his twenty or so years of public exposure?
.
Take your time and give it some thought.
.
Eric L. Wattree
http://wattree.blogspot.com/
Ewattree@Gmail.com
Citizens Against Reckless Middle-Class Abuse (CARMA)
.
Religious bigotry: It's not that I hate everyone who doesn't look, think, and act like me - it's just that God does.