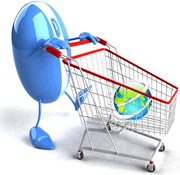 "Still Shopping for God"is a solo play written and performed by Erica Lann-Clark. A nationally known storyteller, solo performer and writer, Erica has been featured at major regional storytelling festivals across the country and twice at the National Storytelling Festival in Jonesborough, Tennessee.   Erica's vivid, participatory storytelling opens the windows of imagination with traditional and original stories.
Erica's original "Shopping for God" which was commissioned by the Marsh Theater in San Francisco, had an extended run in San Francisco and Berkeley in 2007.  This new version, called "Still Shopping for God", premiered at the 2014 Santa Cruz Fringe Festival, and just finished a very successful run at the 2015 Rogue Festival in Fresno, CA.
Don’t miss the wild ride of this hilarious, aging, feminist-Jewish-Hindu-agnostic! This solo play asks three questions. Can we reconcile with the people we’ve hated for years, like children of Nazis and children of Jews? Can we reconcile with the ones we’ve loved for years, like our family? Can we finally change the pronoun for God from “He” to “She”?  Erica is a child survivor of the Holocaust, who evidences how each one of us can turn our fears and angers into freedom and personal power.
“Erica Lann-Clark is fearlessly funny. She commits outrageous acts of comic clairvoyance to get at uncomfortable truths.”              ---Actor, Martin Sheen
“Erica is a spark plug -- winking, nodding, cracking jokes with pitch-perfect timing -- Revelatory and bittersweet!”
---San Francisco Bay Guardian

You can buy tickets online: http://stillshoppingforgod.eventbrite.com , or by visiting our website: http://www.imalosangeles.com. Tickets are $20.00.  You may also pay by cash, check or credit card, at the IMA office, while supplies last. As is our custom at the Institute of Musical Arts, a catered reception will follow the show.

RSVP for "Still Shopping for God", by Erica Lann-clark to add comments!