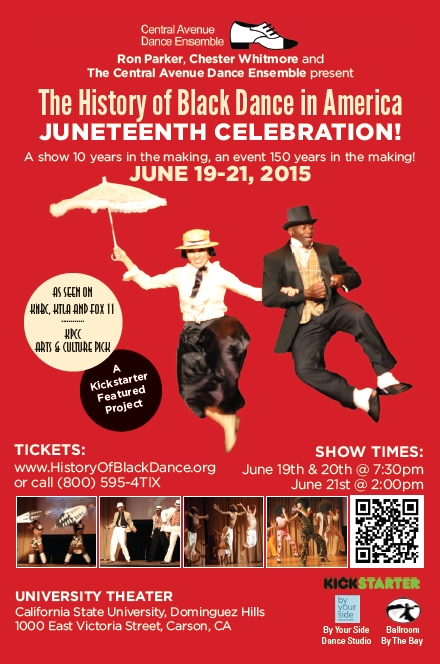 The History of Black Dance In America – Juneteenth Celebration!

Returning to the stage after performing to sold-out crowds, Ron Parker, Chester Whitmore, and The Central Avenue Dance Ensemble present "The History of Black Dance in America" – a spectacular multi-media dance concert showcasing the African-American contributions to American social dance.

Starting from the late 1800s and progressing to the modern era, audiences are mesmerized by authentic renditions of dances such as Zulu, Work Songs, Cakewalk, Spiritual Dances, Shim Sham, Lindy Hop, Foxtrot, the African inspired Latin-American dances, and more.

The 2015 performance also observes the 150th Anniversary of Juneteenth, the oldest known celebration commemorating the ending of slavery in the United States.

The History of Black Dance in America to be performed by the Central Avenue Dance Ensemble, June 19-21, at California State University Dominguez Hills

ABOUT THE CENTRAL AVENUE DANCE ENSEMBLE:

The Central Avenue Dance Ensemble (CADE) is a vernacular jazz dance company named after the famous "Central Avenue" district of Los Angeles which was the center of Black LA culture and entertainment in the early part of the 20th Century.

RSVP for History of Black Dance in America June 19, 20 and 21 to add comments!