Beneath the Spin * Eric L. Wattree
Tavis, West, and Malcolm
. 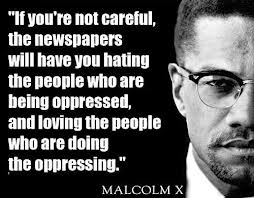 reports that Wells Fargo & Co. allegedly targeted African American borrowers for higher-cost subprime mortgages. The bank attracted attendees to a series of day-long "Wealth Building" seminars held in black neighborhoods in eight cities across the country by featuring trusted black speakers.
.
"The seminars, promoted heavily in black media, featured prominent African American commentator and PBS talk show host Tavis Smiley as well as Kelvin Boston, the host of "Moneywise," a multicultural financial affairs show."
http://www.mysanantonio.com//business/article/Wells-Fargo-to-pay-17... *
.
It's Time to Boycott Tavis, West, and All Black on Black Racists
http://wattree.blogspot.com/2012/09/its-time-to-boycott-tavis-west-...
Eric L. Wattree
Http://wattree.blogspot.com
Ewattree@Gmail.com
Religious bigotry: It's not that I hate everyone who doesn't look, think, and act like me - it's just that God does.