Summer Interlude in the Inner City 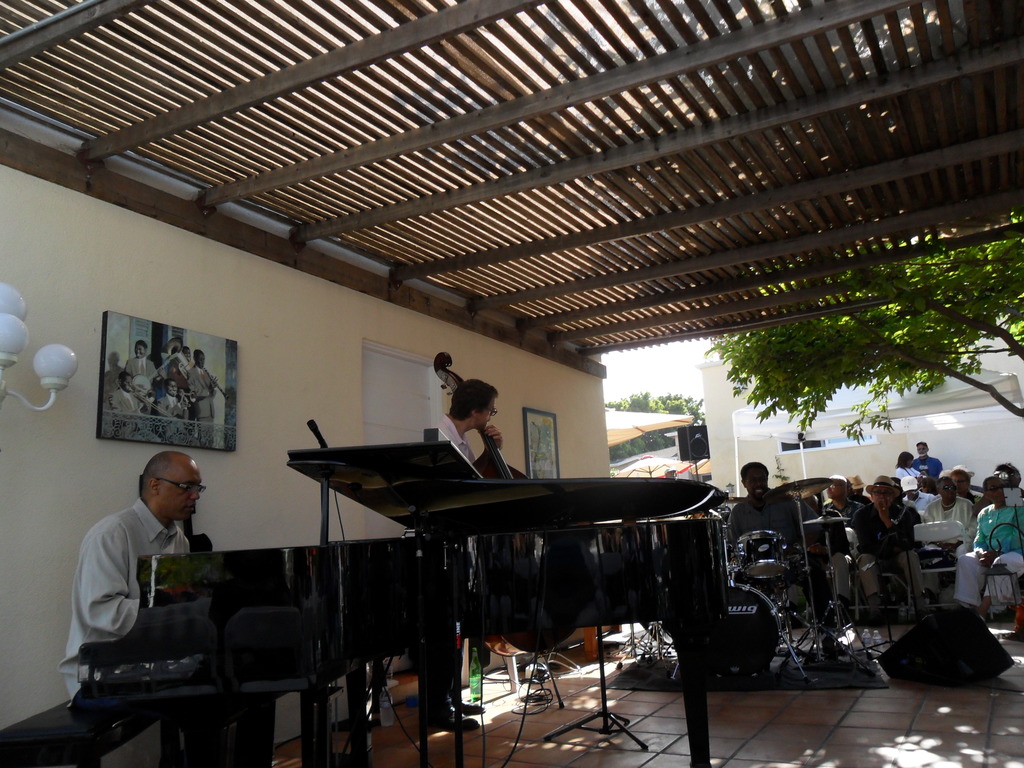 Jazz in the Garden, is a musical journey that takes place during the summer months in the historical and cultural area of Leimert Park. It is hosted at the
home of a most engaging Jazz Aficionada - Yvette Coleman.


This particular occasion was special for several reasons. One of the most crucial was that it was a benefit concert for the legendary "World Stage
Gallery" in Leimert Park - Los Angeles, CA. The founders of this cultural
oasis are the infamous Drummer, Billy Higgins and Poet and Community Arts
Activist, Kamau Daaood. The mission and purpose of the World Stage to this
remains the same.


"To provide leadership, to secure, preserve, and advance the position of African
American music, literature, and worksin the oral tradition to a local,
national, and international audience by providing workshops where classic and
emerging expression can be supported and presented"


On Sunday, July 11, 2010, the rays of the sun gently showered the afternoon and the Billy Childs Trio told a glorious story by means of Rhythm, Blues,
Soul, Straight Ahead Jazz intermingled with shouts of spiritual call and
response.


They began the Jazz Pilgrimage with Cedar Walton's "Bolivia" then moved into Arthur Schwartz's "Alone Together" where Mr. Childs began
to share some sensitive scale work meshed with nice chord movement. Mr. Price
and Mr. Smith accompanied with intuition and beauty as Billy continued to swing
the piece and put a tag with a gorgeous cadenza.


Don Raye's "You don't know what love is" is an infectious and lingering Ballad that Billy shared "he had fallen in love with...some time
back". This haunting tune was colored with the Blues and a spiritual cry
of lost love. Marvin accented through the expressive echoes of Billy's cry.
Hamilton immersed the audience as well in the longing shout as Billy voiced
through his profound chord selection solo. The piece left a mesmerized audience
feeling clearly we "don't know what love is...."


I don't believe there are words in the English language to describe the core feeling of the message the music brings. Billy, Hamilton and Marvin embrace one
so emotively and immediate into the song. Nothing else matters except the
speech they individually utter from their instrument. This is musicality.


The trio performed an original composition Billy Childs wrote for his 14 year old son when his son, Carson was born. Billy mentioned he titled the song,
"In Carson's Eyes" because "his eyes looked like saucers”. It
was wonderful piece with various colors, modes, and a loving sequence.


The first set ended with John Coltrane's "Giant Steps" a tune which originally was a musical exercise! The trio shared their own creative
movement on Coltrane's masterpiece with a trade of 4's...How about 8's? Anyone
for 2's, Must do a trade of 1's.


Oh YES, Oh YES!!!! It was difficult to stay in one's seat as Billy, Hamilton, and Marvin speared one another on in the musical trade of measures
extravaganza.


The afternoon showcased students from the Violin Workshops at the World Stage. This inspiring group of youth is led by Lesa Terry, who is a superb
artist in her own rite.


They performed a Herbie Hancock tune which unfortunately slipped by me combined with Pyotr Ilyich Tchaikovsky's "Swan Lake" turned on its
upside down swinging, Bluesy, Jazz head that must caused a heavenly shout from
the ingenious composer from above.


It was marvelously innovative with only a tinge of that dark hue of Tchaikovsky.


Billy, Scott, Mala, Timothy, Jeremiah, and Joseph all were on Violin.


There was a vocalist with the group, Kathy that shared her own rendition Art Kelly's, "I believe I can fly"


The Childs trio came back to give us more unlimited joy with Jimmy Van Heusen's "Darn that Dream" and Miles Davis' "Pfrancing"
filled with quotes and notes of melodies from some of the greats as well as
their own Childs, Price, and Smith Jazzy solo statements.


This was an afternoon that was a glorious benefit and tribute to a landmark for Jazz in Los Angeles and the world. It was filled with not only engaging
music, great food, fellowship, but an opportunity to give to more than worthy
cause to preserve the Arts in a very prolific manner.


I highly recommend getting out and hearing some of the incredible shows presented at this hidden gold mine in the inner city of Los Angeles at the World Stage.