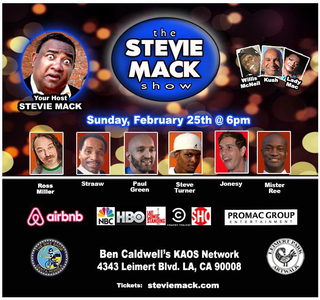 Stevie Mack is celebrated as the longest running comedy host - producer in Leimert Park, consistently producing and hosting comedy shows there for more than two decades.

The Stevie Mack Show runs in conjunction with the Leimert Park Art Walk on the last Sunday of every month (for the last eight years at Ben Caldwell's KAOS Network) and Stevie Mack recently partnered with airbnb experiences to offer his Stevie Mack Comedy Guru one hour comedy crash course to local and international travelers, teaching them comedy then putting them up live on stage at The Stevie Mack Show.

Stevie Mack says, "It was at the world famous 5th Street Dick's Coffee and Jazz emporium where I first hosted - produced Stevie Mack's Topical Comedy Show featuring amateur and professional comedians performing stand up comedy based on a topic I chose for the night. I started that show in 1992 and was amazed at how many celebrities would attend and perform"

DojO- commented on DojO-'s event Jazz at LACMA: "Sax" Dr. Teodoss Avery Quintet "Recorded Live on Memorex" [Sunday Evenings]
"Check out my new album, - TA 'After The Rain: A Night For Coltrane.'  Available on CD, vinyl & on all streaming platforms. “The album pays fitting tribute to a giant” – Downbeat  All About Jazz (4.5/5…"
5 hours ago

DojO- commented on DojO-'s event RISE on KPFK 90.7 FM w/ /\/\ark /\/\axwell - Mondayz 12AM to 3AM
" RISE on KPFK Respect to Randall Roberts for this reminder (+ extra credit for the Bennie Maupin mention). - /\/\/\/\, Facebook Timeline/wall The lost art of deep listening: Choose an album. Lose the phone. Close your eyes. - Randall…"
yesterday