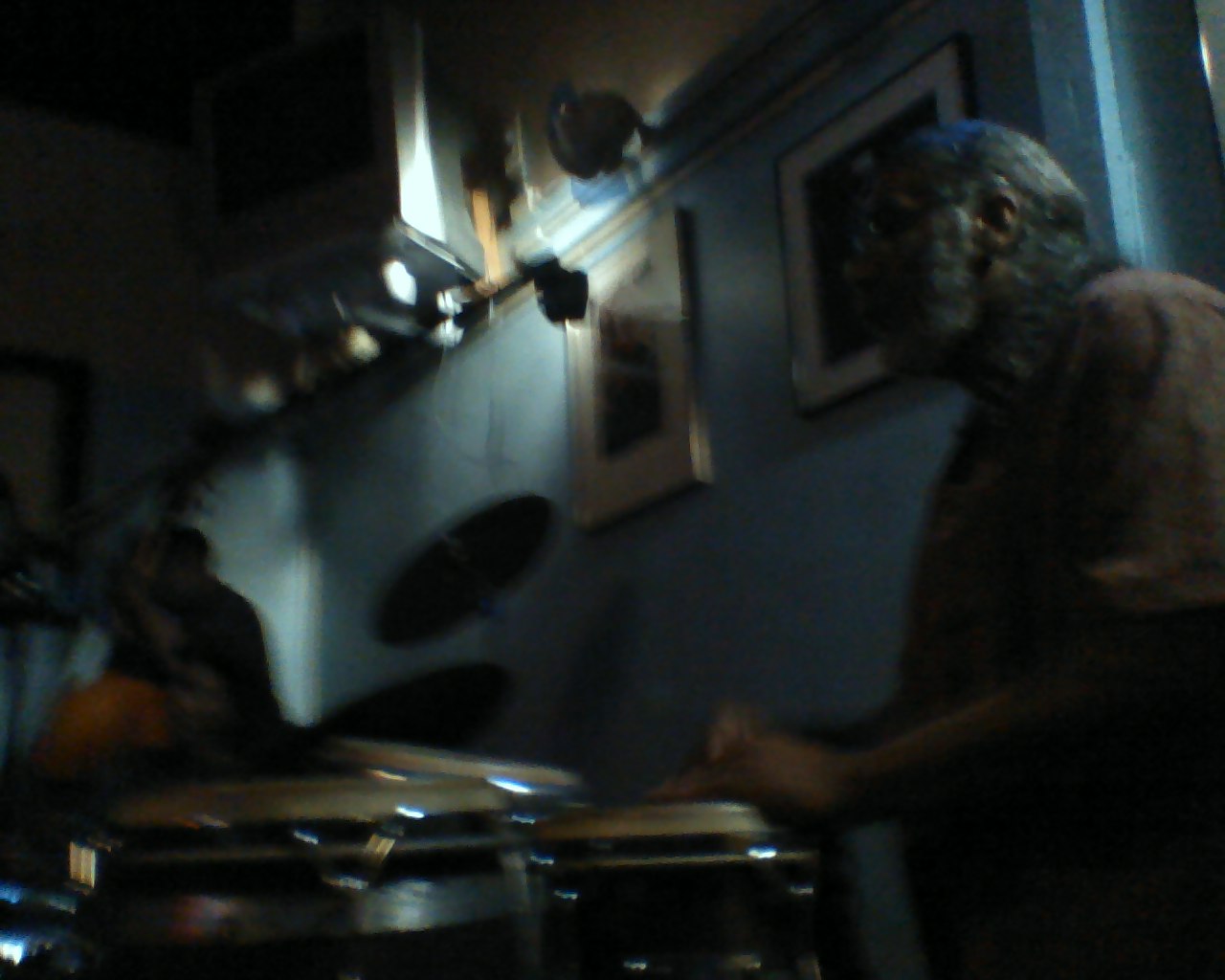 The World Stage Friday Night encounters of the best kind
It’s a dimly lit space. A few people are gathered. A warm and very thoughtful host meets you as you enter at the front door. "Good Evening, Welcome to the World Stage". He smiles. The same gentleman would later share a wealth of knowledge in regards to history of the World Stage, Leimert Park, and Jazz Roots.

The musicians are completing their set up for the adventure about to begin.

Portraits of some of the most creative and best loved musicians surround you on the wall.

They paved the way for what is to come.

The space is embracing, full of energy and anticipation.

The feel that was transpired as the musicians began to take us on a journey back in time was as if you were on Central Avenue in the days when Charlie Parker ignited the boulevard with inspiration from his horn. A world that was decades prior to You Tube, Face book, Twitter, Drum Machines, CD's, IPod’s, Cell Phones...all that is not akin to LIVE MUSIC MAKING!

Pyramid Central shared their gifts with a spellbound crowd at the World Stage on September 11th, 2009.

A voyage that began with Sonny Fortunate's "Son Shower" was like a cascade of musical joy. It was a refreshing and immersing experience. Andrew on Flute exercised every octave of the instrument inviting a great union between Latif on Bass and himself. Neil on Piano joined in with perfect accompaniment along with Conga Mike on Congas.

Allaah-dain added tantalizing runs on Sax. Andrew continued to share colors I never knew existed along with a tad of history on each tune performed. The warmth and beauty of the music seemed to have been doused with a certain grace that lingered no matter what the tune was the ensemble played.

"Fly with the wind" by McCoy Tyner is a gem that took us sailing to the place of no return in Jazz. The depth, beauty, and intensity shared by each artist embraced us. Latif on Bass carried us through the torrent of tantalizing textures, while Neil added chord progressions which fed the soul. Conga Mike on Congas and Sonship on Drums shared a force to be reckoned with by simply abandoning your all to it. Just lean into the pulse and groove.

The charming Chini Kepeno gave a novel touch to a Sonny Rollins piece made famous by Roland "Rashaad" Kirk - "Serenade to a Cuckoo". This tune is one of my all time favorites.

Chini's approach is playful, including accommodating a bit of meticulous scatting, with a feel of call and response from Andrew on Flute and some stimulating sound effects to go with it.

Allaah-dain was right in there as well on his Horn. The rhythm section consisting of Conga Mike, Latif, and Neil added embellishments that the audience and I relished as part of the main course on ship.

It was funky, soulful, bluesy, and done with Ms. Kepeno inspiration bursting forth with joy.

Don't ask for the exact lyrics she presented....I along with the audience were wrapped up in the midst of music pleasure of the serenade.

Chini shared the Thelonius Monk Ballad - "Round Midnight" with a Cinderella twist as it was about that time the carefree lady began to share her Blues-filled plea with stirring yearning. Check out the lyrics if you don't know them then imagine love vanished returning only in a memory every midnight.

Miles Davis' "Nardis" came loving with an introduction by Andrew that captured us in its glamour. It was very comfortable allowing the ensemble to take one to the place of deeper waters during this tune. There were more wonderful solos and wonderful connection between the musicians.

An unorthodox wisdom with every fiber of the music was expressed by each of the musicians. It was knowledge beyond years. I'll just quote Andrew Jerald's comments after the second set, as he precisely sums it up” Playing with these musicians... the musicians play like they have lived 500 years".

Charles Lloyd’s,” Forrest Flower" was displayed with an urgency and exquisite expression, once again many colors within the music was expressed and Conga Mike on Congas was brilliant along with Sonship Theus on Drums, Allaah-dain on Saxophone and Neil on Piano expressing the very core of the song. Latif continued holding down the fort on Bass in his steadfast and inventive style.

The musicians made music in a fashion not done before and as will never be done again. This is an essential element of the heart and spirit of Jazz.

There was a poignant tribute by Andrew Jerald to his Mother. The tune was called “Miriam”. It was filled with images that portrayed space and time in the music, touching solos, and vivid memories of a woman who raised a humble, intuitive, and ingenious, man and musician.

The night was filled exceptional medley of unpolluted Jazz and the voyage was one I never wanted to end.

For a premium excursion, look for The Pyramid Central's next concert in your area.

This is music, connection, soul, and holistic artistry in the highest form.