Satchmo At The Waldorf Arrives In Los Angeles 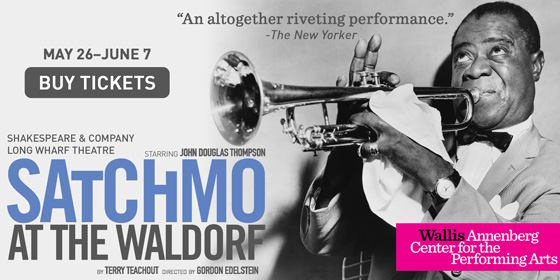 Described as “an absorbing and uplifting new play,” Terry Teachout’s Satchmo at The Waldorf makes its debut in Los Angeles this May at the Wallis Annenberg Center for the Performing Arts. Running from Tuesday, May 26 through Sunday, June 7 for a limited 15-performance engagement at the Lovelace Theater, Satchmo portrays the racial struggles and musical triumphs of the man who invented jazz, Louis Armstrong. Press opening is scheduled for May 27.

Starring Obie-winner John Douglas Thompson as Armstrong, Miles Davis and Joe Glaser, this exhilarating one-man show looks to give its audience an insight into the realities that Armstrong faced as he lived through a changing society in the late 60s.

“He was the joyous entertainer who sang ‘Hello, Dolly!’ and ‘What a Wonderful World’ and made millions of people feel warm inside,” said Teachout. “But Satchmo at the Waldorf is also about the private Armstrong. The fact that Satchmo (as he loved to call himself) had two sides to his personality doesn’t mean that the public man was somehow less real than the private one. Like all geniuses, Armstrong was complicated, and that complexity was part of what made his music so beautiful and profound.”

Set backstage during one of Armstrong’s last performances before his death in 1971, the play centers around the complex relationship Armstrong had with his manager of more than thirty-five years, Joe Glaser. As he wanders off with a recorder on hand, Armstrong reflects on his life’s journey recounting everything from his rough childhood to the moment his fame skyrocketed.

Known for having changed the sound of jazz, Armstrong created the jazz language that is known and recognized today. He was one of the most influential and important jazz artists of his time and many critics have gone as far as to claim that his 1920s recordings with the Hot Fives and Sevens were the single most important recordings in jazz history.

Teachout was inspired to write the play, his first, after completing Pops: A Life of Louis Armstrong, a biography on the life of the great Satchmo. There were aspects of the musician’s life that evoked more questions for him, particularly his career-long dealings with his mob-connected manager Joe Glaser. Unsure how Armstrong really felt about the man who steered his career, Teachout felt there was a dramatic truth to be explored that was absent from the unembellished biographical record.

Directed by Gordon Edelstein, Satchmo at The Waldorf played several sold out engagements at the Long Wharf Theatre, Shakespeare & Company and Off Broadway in New York. Both cast and designers received a number of riveting reviews from several publications for their work. The New Yorker, for example, described the show as “an altogether riveting performance.”

In 2013, Thompson won the Drama Desk and Outer Critics Circle “Outstanding Solo Performance” awards for Satchmo at the Waldorf and was described by The New York Times as one of the most compelling classical stage actors of his generation.

Calendar Listing for Satchmo at the Waldorf

'We are not surprised': Women of color say the courts have never served their communities; Analysis: John Roberts lost the defining case of…See More
9 hours ago
0 Comments 0 Promotions