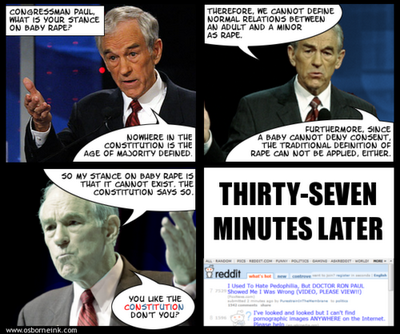 It's really frightening how many Americans are willing to listen to a guy like Ron Paul. The congressman is clearly one of two things - he's either a typical demagogue, or an unthinking ideologue. He specializes in combining fact with fiction by pointing out everything that’s wrong with all of the policies that are contrary to his agenda, then claims that his irresponsible solutions are a cure for all of the nation's problems - solutions drawn from an outlandish philosophy, which, on its face, is a corruption of the U.S. Constitution, and would constitute an exercise in national destruction. Paul is quoted as saying the following:
.
“The most basic principle to being a free American is the notion that we as individuals are responsible for our own lives and decisions. We do not have the right to rob our neighbors to make up for our mistakes, neither does our neighbor have any right to tell us how to live, so long as we aren’t infringing on their rights. Freedom to make bad decisions is inherent in the freedom to make good ones. If we are only free to make good decisions, we are not really free.”
.
Paul's entire premise is flawed. Total personal freedom was clearly not the intent of the founding fathers. They had the good sense to recognized that a society, or a civilization, as it were, is defined as a “GROUP of people who have joined together to pursue a common interest or goal,” and they clearly set out their intent in the preamble of the United States Constitution, which reads as follows:
.
“We the People of the United States, in Order to form a more perfect Union, establish justice, insure domestic Tranquility, provide for the common defense, promote the general Welfare [not just make Ron Paul happy] and secure the Blessings of Liberty to ourselves and our Posterity, do ordain and establish this Constitution for the United States of America.”
.
Thus, if Ron Paul doesn’t like the rules we’ve set up to “promote the general welfare,” he has the freedom to move to the wilderness and not live among us. But according Ron Paul’s philosophy, he thinks he should have the right to pee against the wall in the middle of Times Square during rush hour, and the government should be precluded from stopping him.  Because you see, according to Paul’s  philosophy, and his flawed reading of the United States Constitution, that should be his inalienable right, since he's not hurting anyone else.
.
So in essence, Paul wants to have his cake and eat it to. He wants to take advantage of the benefits of living in an ordered society, while not having to adhere to the rules that make it a society. For example, he contends that the civil rights laws that prevent him from refusing to serve certain groups in his restaurant abridges his right to private ownership. But on the other hand, he has absolutely no problem with the fact that the group that he bans is forced to pay taxes that support “his right to private ownership.” If his business catches on fire, he’s going to expect the banned group’s tax supported fire department to come put it out.  And if he’s robbed, he’s going to expect the group’s tax supported police department to come to his aid. But the fact is, he can’t have it both ways. If he's not willing to adhere to society's rules, he can't expect to take advantage of the benefits of living in an ordered society.
.
Paul also wants to abolish the Department of Education, which is essential to maintaining a “more perfect union.” His philosophy also dictates that we should simply “trust” corporations not to grind up rats in our ground beef, or pollute our air and water.  He says, “Just let the free market handle it.”
.
Well, that sounds like a plan, but we saw how the free market handled the Wall Street fiasco, didn't we? The free market created it, and we paid for it - dearly. The only thing free about the free market is the freedom of ruthless and greedy capitalists to take advantage of a naive and unsuspecting public - and then they tell us we'er un-American if we complain about it.
.
Thus, Ron Paul’s philosophy represents the rantings of a selfish, unthinking, greedy, and totally irresponsible lunatic. Therefore, if he wants total personal freedom, it’s well within his grasp. He can vote with his feet and move to the wilderness. Then he can pee against any tree in the forest at will - but he shouldn't expect us to come to his aid if a snake decides to latch on to his pecker. That's the price of total freedom.
.

Eric L. Wattree
Http://wattree.blogspot.com
Ewattree@Gmail.com
Citizens Against Reckless Middle-Class Abuse (CARMA)
Religious bigotry: It's not that I hate everyone who doesn't look, think, and act like me - it's just that God does.