On A Mission to Make A Difference: My Million Foot Commitment for Causes & Charity book by Michael Taylor 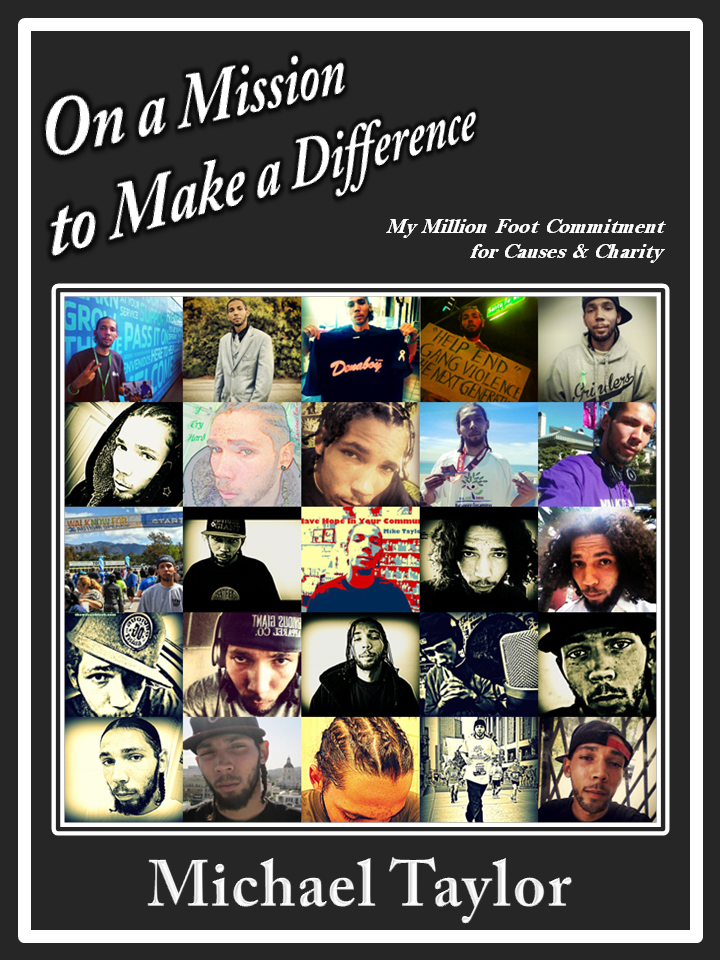 Proceeds from this book go toward my Avon 39mile Walk to End Breast Cancer in Santa Barbara, CA on September 10th & 11th, 2016.

In 2013, Pasadena artist Michael "Bing Bing" Taylor made a 'One Million' foot (or 190+ miles) commitment for causes and charity through participating in community fundraising walks and creating his own extreme-distance efforts. Bing Bing walked for causes and awareness relating to Autism, Alzheimer's, Homeless Youth, Foster Kids, Ending Gang Violence, and more. In late 2015, Bing Bing fulfilled that commitment and even inspired other local artists to make the pledge. Here are the official walks:

-10mile Walk to prove that I can go the distance. Hollywood to Inglewood.
-27mile Walk to unite my local music scene and to promote breast cancer awareness. Altadena to Gardena.
-21mile Walk to help end gang violence for the next generation. West Hollywood, through Watts, to Compton.
-2014 LA Marathon. Raised $1,000+ for foster youth.
-33mile walk for empowerment in honor of refugees. Altadena to Long Beach.
-42mile Walk for Love, Peace, and Unity in honor of Jackie Robinson. East Pasadena to Leimert Park.
-27mile Walk for Respect and Common Courtesy in honor of Good Fathers. Pasadena to Pomona.
-20mile Walk for Victory in Advance. North Hollywood to Northridge.
-50mile Walk for Determination inspired by Helen Keller. City of San Bernardino to Pasadena.

"Participating in community outreach was my alternative approach to the game," says Bing Bing. "Not only has it helped me become a positive role model for my peers, but through the journey I've discovered solutions for gang violence and bringing people together for common causes."

The Music Center’s Dance DTLA series is back for a full season of dancing under the stars on Jerry Moss Plaza at The Music Center most Friday nights this summer! Eventgoers can dance the night away to various dance styles from June 3 through…See More
7 hours ago
0 Comments 0 Promotions