Healthy 'Hoods: How do you build a healthy community?

The health of South Los Angeles suffers in part because much of this area was designed for the poor. The infrastructure itself plays a role.

Many of the problems we are facing today were built into the very structure of the Los Angeles area.

Today's  environmental injustice was no accident in the Los Angeles area, according to Jennifer Wolch, dean of the College of Environmental Design at the University of California, Berkeley.


Click on the map to find out the location of your local parks, farmers markets and community gardens. 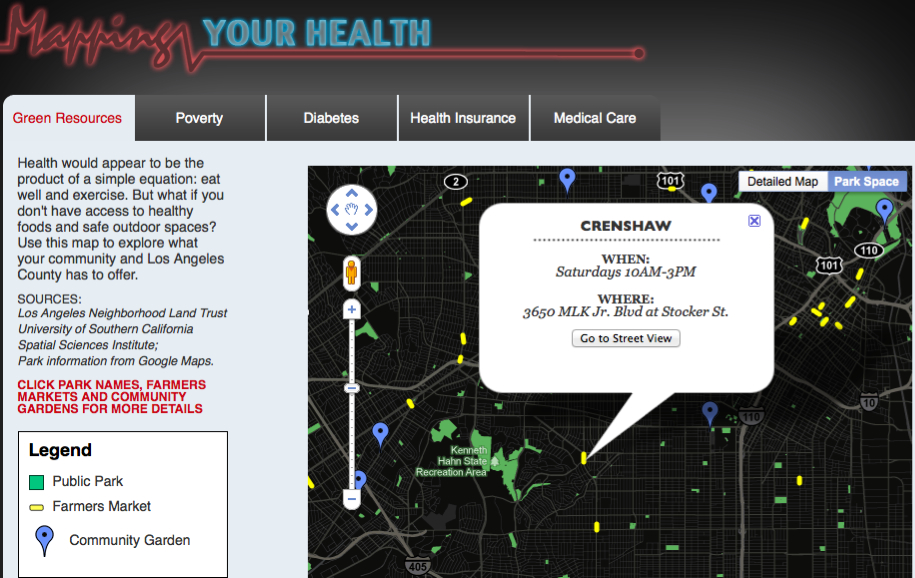 In part, the 1904 zoning code, according to the “Parks and Park Funding in Los Angeles: An Equity Mapping Analysis.”

It was the first ordinance to regulate where buiness and residences could locate. It protected West L.A. from undesirable land uses, such as industrial activities and high density housing, Wolch reports. In 1912 the city of Torrance developed a well-thought out plan house the city’s workers, mainly Latinos, downwind of the city’s industrial plants and their pollutants.

In addition to school segregation through the 1940s and racially restrictive housing covenants through the 1950s, parks were also historically segregated in Los Angeles.

Blacks could only swim in the municipal plunge on International Day, the day before the pool was cleaned and the water drained, according to “Healthy Parks, Schools, and Communities: Mapping Green Access and Equity” by Robert García and Aubrey White of City Project.

Bruce’s Beach in Manhattan Beach was one of the few beaches blacks could enjoy in the the 1920s. By the ‘30s city officials forced them out and were left to the only other place for blacks to enjoy the ocean, the Inkwell at Pico Boulevard, according to the City Watch report.


With such a history, how can a neighborhood – especially one so dense and so park poor as South Los Angeles – encourage physical activity? 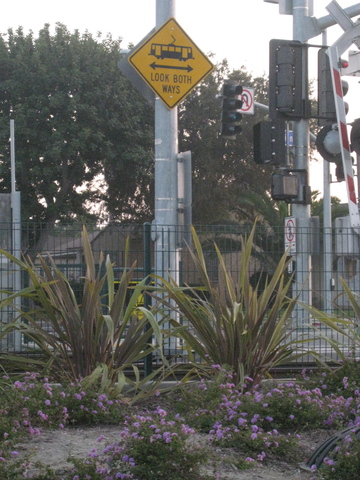 By building healthy communities that have parks, schools, retail and housing within walking distance of each other – with good sidewalks and bike lanes –  so people will be encouraged to use their feet or a bicycle.

By creating communities where people feel safe. Good sidewalks and good lighting make people feel safer walking around, even after dark. And these amenities also encourage people to walk more, according to the study,  “Walking and Bicycling: An Evaluation of Environmental Audit Instruments
and the report, “Walkable Communities.”

After a 50 year absence, the Expo Line light rail train will

return in 2010. With it comes new landscaping along a

“Applying public health criteria to land-use and urban design decisions could substantially improve the health and quality of life of the American people,” according to the Centers for Disease Control and Prevention, according to the study, “Creating a Healthy Environment: The Impact of the Built Environment on Public Health.”

Walking a little more or having a park nearby could help shed just a few pounds. A few makes an impact – losing seven pounds helps reduce the risk of developing diabetes in high-risk patients by 60 percent. Diabetes is linked to obesity.

“If you make some changes you can feel safe walking to the corner store or the mall,” says Anthony Crump, a policy analyst with the Community Health Councils in South Los Angeles. “If you have a bike lane and bike parking kids and adults will be more likely to use them.” In the same way, infrastructure can encourage people to walk because there are shade trees, crosswalks and street furniture. People are more likely to ride bicycles when there are bike racks to park their bike and bike lanes that are clearly marked.

The Children’s Nature Institute is attempting to deal with South L.A.’s  urban legacy by enticing kids to go outside and enjoy the flora and the fauna in South Los Angeles.

Ingold Park in View Park was recently improved with a

They take children on hikes right on the city streets and they inspect ant hills, spider webs and bean pods. They take what they can get and use it as a science lesson and a moment of wonder.

It seems intuitive that green space would be a somewhat healthful benefit. Still it’s easy to underestimate how much of a difference it can make on your mind and body.

“There are demonstrable benefits to having open space as well as experiencing different species of birds and animals - even when people are not trained to know what they are looking at,” says Travis Longcore, science director of the Urban Wildands Group and an associate professor at USC.

“Every study says yes it matters. People internalize elements of their environment.”

But really how much of an effect can it be?

People in an office with plants score better on repetitive task and memory recall, Longcore says.

Imagine what a tree could do:

• Outdoor play is critical to a child’s cognitive development

• Views of nature are linked to the mitigation of attention deficit disorder.
“Studies show that when going outside for exercise, it is better for your psychological health and well being, as well as helping prevent obesity and diabetes,” Rhone-Collins says.

But where can we put these trees?

In the third part of this series, we’ll look at a green space that was saved from development in the South Los Angeles community of Leimert Park.

This project was made possible through the support of the USC Annenberg Health Journalism Fellowship program, funded by the California Endowment.


LeimertParkBeat.com and SoCal Connected partnered to produce this series.

Healthwise is a SoCal Connected series examining how community and environment can impact your health. Reports are made possible by a grant from The California Endowment. VIEW THE FULL SERIES »

Read the studies and reports:

"Why Place and Race Matter."

"Obesity on the Rise."

"Diabetes on the Rise in Los Angeles County Adults."

“Walking and Bicycling: An Evaluation of Environmental Audit Instruments”

“Creating a Healthy Environment: The Impact of the Built Environment on Public Health.”)

Comment by Mel Taylor on November 5, 2011 at 7:24am
Eddie, keep up the good work reporting the issues and successes in the community, you are an admirable asset to the city presenting such excellent stories and providing useful information. May our awareness be heightened, our health and wellbeing vibrant. We owe it to ourselves, families and friends to live in balance as conscious stewards of the gifted paradise. I so enjoy walking this trail and walking at the park above; it is a wonderful treat. It is also a joy knowing you and being associated with the Leimert Park Beat. It's so marvelous & so cool !  ~Namaste~

Comment by enhager on November 2, 2011 at 7:33am
Hey Cory thanks for reading the post. It's been one of the hardest stories to write because I had paid so little attention to these issues before. But now that my eyes are open, I see health in every aspect of our lives.

Comment by Cory Tyler on November 2, 2011 at 3:58am
Great blog, Eddie!  Thanks for bringing this issue to light.  It's great minds like yours that lead to awareness and change.  I am right there with you!  Peace,  Cory