“Obesity has reached epidemic proportions in the United States.”
That quote should read like a public health bombshell, yet it’s not even news anymore. It was the opening line of a study published in “Science” magazine back in 1998. The authors, James O. Hill of the University of Colorado and J.C. Peters of Procter and Gamble, Co., were among the first to identify this American public health disaster. But, if anything, the problem has gotten worse.

From 1980 to 2004, the percentage of young people who were obese tripled nationwide, rising to 18 percent, according to the Centers for Disease Control. Here in Los Angeles County, officials report more than half the adult population is now overweight.

And while obesity is a problem for Americans in all walks of life, it’s worse when you don’t live near a park, when access to public transportation is limited, when sidewalks are broken and streetlights are few. 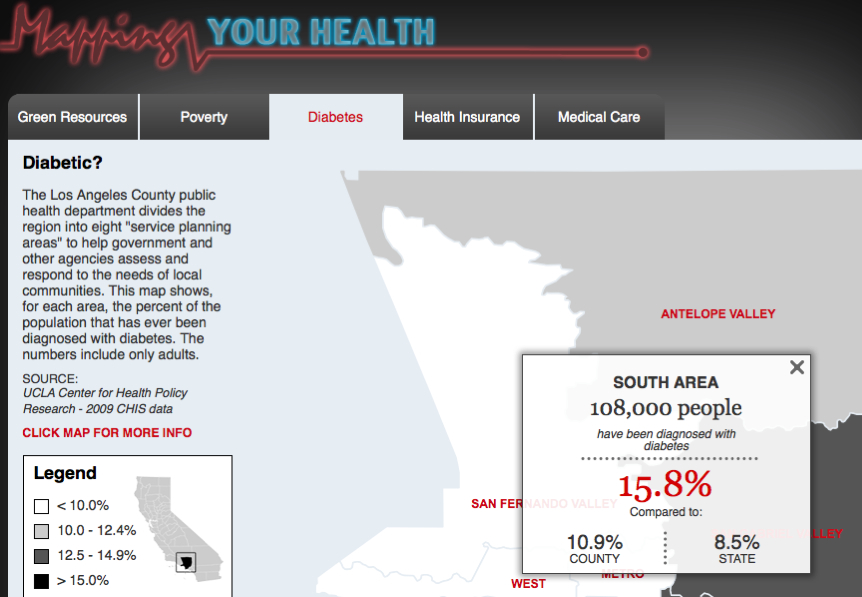 “We have to recognize that where we live affects our health,” says Anthony Crump, a policy analyst for Community Health Council, a group that aims to eliminate health disparities in South Los Angeles.

Crump studies the relationship between the built environment and personal health.

“If you live with limited access to parks and recreation, to high quality food, it is reflected in your health status," Crump says.

In fact, a National Institutes of Health study found that just living in a socioeconomically deprived area leads to weight gain and a greater risk of dying at an early age.

As a homegrown example, people in Culver City live an average of eight years longer than people in Jefferson Park, according to Crump. Yet these two communities in the middle of Los Angeles are only a couple of miles apart.

“There are a whole lot of reasons why, but the bottom line is that the disparity is huge,” Crump says. “Look at the big picture and it’s a stark reality."

The neighborhoods of South Los Angeles suffer more than most:

• Thirty-three percent of children there are overweight.

• One in seven residents has diabetes, compared to one in 12 in West L.A.

• Forty-two percent of South L.A. residents live below the federal poverty level, compared to only 12 percent in West L.A., and the numbers correspond with the rate of diabetes in each area.

But South L.A. is not alone in terms of limited park space. Nearly two-thirds of the children in Los Angeles County – mostly the children of the poor – have no park or playground near their home, according to the City Project, which promotes increased parks and recreation for underserved communities.

“When you have less access to parks and the streets are unfriendly for walking and biking, there is less physical activity among kids and adults alike," Crump says.

There have been some positive changes, though. Dania Bautista is trying to shed a few pounds, and the city has made it a little bit easier for her. The 29-year-old works up a sweat at Van Ness Park in South L.A. on the outdoor elliptical machine, one of several pieces of workout equipment installed throughout the park.

She comes to the park to watch her friends play soccer. Instead of being just a spectator, she takes the opportunity to get in a workout.

“I do this for my health – I’m fat and I need to lose weight and it’s not pretty,” said Bautista, who operates a tamale cart. “Before, I didn’t work out at all.”

Even modest weight loss (only 7 pounds) has been shown to reduce the risk of de.... That’s 30 minutes of physical activity on most days. It’s going to the park or riding your bike to the market.

Ultimately, the health of a neighborhood can be measured by the levels of obesity and chronic disease, cardiovascular health, and exposure to pollution and cancer causing agents.

As Hill and Peters wrote in 1998, "To stop and ultimately reverse the obesity epidemic, we must ‘cure’ this environment."

So how do you cure the environment? How do you create healthier neighborhoods? In the second part of this series, we’ll look at the ingredients needed.

---
This project was made possible through the support of the USC Annenberg Health Journalism Fellowship program, funded by the California Endowment.

LeimertParkBeat.com and SoCal Connected partnered to produce this series.

Healthwise is a SoCal Connected series examining how community and environment can impact your health. Reports are made possible by a grant from The California Endowment. VIEW THE FULL SERIES »

Read the studies and reports:

"Environmental Contributions to the Obesity Epidemic."

"Why Place and Race Matter."

"Creating A HealthyEnvironment: The Impact of theBuilt Environment ...

"People Living in Poorer Neighborhoods at Increased Risk for Death,...

"Diabetes on the Rise in Los Angeles County Adults."

"Obesity on the Rise."