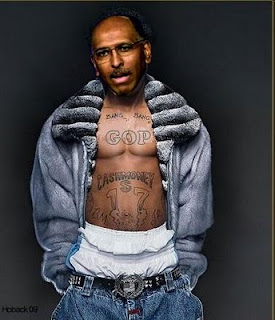 The national media has seized upon yet another Michael Steele gaffe. This time he's caught on camera suggesting that the war in Afghanistan is now President Obama's war. The statement is troubling for the GOP on so many levels that it would take an entire article just to explain it, but that's not the point of this article.

This is a reprise of an earlier article, which refers to yet a previous article regarding the Republican party's troubles with the illustrious Michael Steele, the conservative Snoop Dog. Now the GOP desperately wants to find a graceful way to get rid of him, but to put it in Brother Steele's vernacular, 'We don't roll like that, Dawg' - and further, he doesn't have sense enough to resign. Why should he when he gets to 'boogie-down' on the world stage? 'This is better than being on Soul Train, my man.'

Do you remember what I told you about a turncoat's character? Well, I hate to gloat, GOP, but I told you so . . . Dawg. Now it looks like you're cynical attempt at political manipulation have finally come back to bite you directly in the rectum - and it couldn't have happened to a more deserving bunch. And ironically, Steele is the perfect symbol for the GOP - a bunch of self-serving clowns.

Immediately after the election of Michael Steele as the Chairman of the Republican National Committee, I pointed out in my article, Republicans: "Look Y'all - We Got Us One Too", that The RNC ploy to elect Steele as the first African American chairman in its 153 year history was not only grossly transparent, but was going to backfire in a very big way - and I was so right on target with that prediction that the RNC should hire me as chief consultant against Republican stupidity. Steele couldn't have been a worse disaster for the GOP if he'd been planted.

The very first thing I pointed out in the previous articles was that you elected Michael Steele chairman of the RNC for all the wrong reasons. I indicated that "anyone with an ounce of sense can see that this is a gimmick. Republicans were defeated so badly in the last election, and Obama is so popular, that they figure Black must be the political flavor of the season, so they went out and "got them one" – it didn't matter who, just long as his skin was dark. But again, they're so politically jaded that they're completely out of touch with the American people."

I then went on to pointed out that "the American people didn't elect President Obama because he's Black - they elected him because he demonstrated that he was an intelligent and competent statesman." In addition, "He was also elected so overwhelmingly because for the past eight years the Republican Party has clearly demonstrated that it was overflowing with corruption, incompetence, and greed . So while it's hard for the RNC to believe, for the very first time, we've had an election that was based strictly on the issues and relative competence, and not race" - which seems to be a point that still hasn't struck home with the Republican Party.

The RNC also turned a deaf ear to the suggestion that "if part of the Republican calculation was that by making a Black man head of the Republican Party it was going to help their numbers in the Black community, they're going to be sadly disappointed –in fact, they've hurt the Republican brand even more." The fact is, "If they'd ever taken the time to truly get to know the Black community, they would have known that the only thing more toxic to Black people than a flat-out racist, is a Black conservative, with the notable exception of Colin Powell – because we suspect he's not truly conservative [at least by today's definition], simply loyal" to those who helped to promote his career.

What has contributed greatly to the Michael Steele disaster, and many other problems within the Republican Party is the unmitigated arrogance of their leadership. Many Republican leaders confuse economics, social status, and ivy league diplomas with intelligence. They equate the quality of one's life and social standing with the quality of one's intellect. They fail to realize that there's a vast difference between the two. That's why they're rapidly becoming a regional party. They so greatly underestimate the intelligence of the American people, that it's gotten to the point where the only people they appeal to are the minority of Americans who are indeed ignorant. Thus, their entire platform has become one of lending comfort to the uninformed.

They fail to recognize that intelligence is not limited to the upper class. Nor do they seem to understand that social stature and the ability to obtain an ivy league diploma means nothing more than one has the resources to purchase a seat in an environment where knowledge is available. Intelligence entails much more than regurgitating information by rote in a rarified environment with ivy growing up the walls. Granted, there are many brilliant professors at Harvard, Yale, and many of our other universities, but brilliance isn't transmitted through osmosis. If one is committed to learning there is just as much knowledge to be absorbed on google or the corner library as there is at Harvard.

Thus, while these institutions of higher learning can, and do, confer diplomas, no institution in the world can confer common sense, wisdom, nor intelligence. These are qualites that are distributed equally throughout the population, so these Republican leaders need to recognize that they're making a serious error in thinking they can look soberly into the camera and begin to hemorrage their lies and disinformation upon the American people. It is, in fact, only they're own arrogance and stupidity that allow them to assume that they corner the market on intelligence

Clear evidence of that is the fact that the RNC, with all of it's experts, "political savvy", and think tanks, was completely oblivious to a fact that their attempt to push Michael Steele down America's throat as a Black clone of President Obama was the height of stupidity. It takes much more than black skin to create a Barack Obama. Any high school kid in any ghetto in America could have told them that - in spite of their atrocious educational environment.

Many of these academically deprived young people would have had the innate intelligence to inform the RNC exactly what I did:

"Most Black people have very little use for Black conservatives. It's not that we disagree with everything they say, but because we're suspect of the reasons they're saying it. Without exception, every Black conservative I've come across is an opportunist. Their conservatism tends not to be so much grounded in their actual philosophy as it is an opportunity to gain exposure. They realize that conservatives are looking high and low for Black people who will step forward to validate [Republican] views towards the Black community, so they gleefully allow themselves to be used in return for personal wealth, position, and notoriety."

So as we in the Black community sit back and watch the Republican Party struggle with this Michael Steel disaster, for once, we're having the last laugh - and believe me, the entire Black community is rolling in the isles. Because, you see, as "uneducated and politically unsophisticated" as we are, we had more than enough common sense and, yes, intelligence, to know what you were getting. So we're loving it, and hope it continues for months on end. Just this once, we've lived to see Uncle-Tomism work to our advantage. And even beyond that, we now have prima facie evidence of your unmitigated stupidity.

As I pointed out in my earlier article, "Black people have suffered a long history of such people [as Michael Steele], going all the way back to slavery. These were the very same people who would informed on slaves who were trying to escape to freedom: 'I don't know what's wrong wit him, boss. Ya jest can't get him to appreciate nothin' you do for us. What he needs is a real good beatin'. Want me to do it?'" But this time, due to your clumsy attempt at political manipulation, you're stuck with him.

What did he tell you? "Either fire me, or shut up!"

Don't think he didn't get a kick out of that. Even as an Uncle Tom (Yeah, I said it), he's more than cognizant of our history of having to lick the "master's" boots. So now that he's got you by the short-hairs, he wasn't about to pass up the opportunity to tell you to kiss his ass - his Black ass - and that's exactly what he did. And the beauty of it is, you're gonna have to do it - publically. That's what happens when you lie down with dogs. Next time have your "think tanks" consult any Black kid over twelve.

So next to the election of President Barack Obama, hearing that statement come from the lips of a turncoat to his master was the most delightful moment of my political life. It's nothing short of poetic justice.

While it's generally not my nature to gloat, watching the Republican Party - THE GREAT MANIPULATOR - being played like a two dollar whore by a third rate tennis shoe pimp, strips me of all pretense of social propriety. And here's the great part - it doesn't matter who wins or loses, whether the RNC or Michael Steele. Regardless to how it turns out, we win.

It's a situation so perfect in it's design, it simply has to be an act of God.