Exerpt from my new book entitled The Belly of a Woman 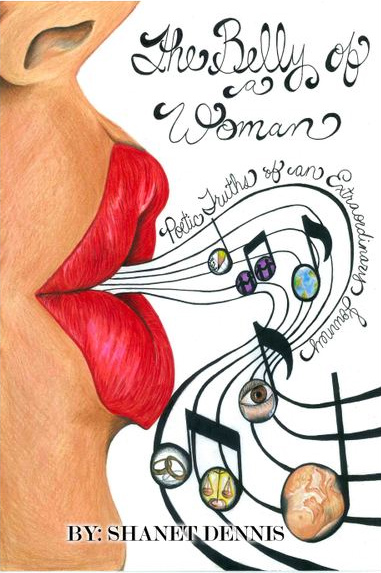 Reserve your copy at www.shanetdennis.com

Hey you!
I was hoping I could see you tonight.
He was like…
“I’m coming”
And like a thief in the night he came
Framed me with his attention
And with every extension
he loved me hard.
My guard had dissolved
as he solved every single problem
I had created from past anxieties.
The fight in me wanted to remain cautious
But this Boss just made me relax
Tried to give me my space
But I was like…
Come back.
He said…
“I’m coming”
And like a thief in the night he came
Tamed me
Named me his wife
Then gave it to me like he was
Recreating life
I didn’t wanna stop it
Cause he was in the pocket
Can we prolong it for a minute B?
I’m not ready for it to be a memory.
He was like…
“I’m coming”
And like a thief in the night he came
Rained on me
but it was like rain in the summertime
I was trying to watch the sky
But was blinded by the shine
So all I could really do is close my eyes
And feel
My goodness I was thrilled
No raincoat required
When I received the weather report
I was wired to explore what Mother Nature
Had in store for me
I was hoping there was a little more for me
When he whispered
“I’m coming”
And like a thief in the night he came
Can I blame him?
Yes!
Cause I’m giving him my Yes
My Yes Yes
And My Yes Lords
Hitting high notes with
dry vocal cords
I was thirsty
But while he was working me
All I could think was…
“Can I have another drink?”
Cause…
I’m just not getting my fill
So if you will…
I’d love to go one or two more rounds,
and with every one of his 170 pounds
He was like…
“I’m coming”
And like a thief in the night he came.
I came
We came together
Like never before
Our love rang louder
Than a lion’s roar
Louder than a fan
Praising his final four
Louder than a crowd
when Kobe hit that three for the final score.
Need I say more?
Yes!
See
cause
He blessed me
He was
More than a conqueror
He was as stallion
Cause at the last mile’s end…
He kept going
He kept going
He kept growing
This was getting heavy
Cause I wasn’t ready
For this to be continued
I read the menu
And I’ve already had every single dish
He was like
“You coming?”
I was like
“I wish”
I wish I was able
But my body’s growing numb and
Will soon be disabled
Can I have a few more moments to become stable?
I’m confused
Yet highly amused by his tenacity
And still he kept asking me
questions like
“You coming?”
All I could do was stutter
Like umm…
Can I have a piece of gum?
Or something to avoid this cotton mouth
It’s hot in this house
Can we open a window?
Then his voiced started to crescendo
With every innuendo
Like…
“This is what u wanted, right?”
Right
“This is how u wanted, it right?”
Right
Soon after he caressed me
He left me
There to
Wallow in my sweat
Regret was farfetched
I was tingling
Doorbell ringing
But I wasn’t up for mingling
I was thinking on how I
Wanted to do it again
That’s when I decided to phone in
I was hoping I could see you tonight.
Or something…
He was like…
“I’m coming”

Like a thief in the night he came
But it wasn’t the same
He
Seemed so disconnected
Like there was a lack of respect
It was awkward to be around him
Just days before I was happy to have found him
Happy to just be
Holding him
Molding our bodies together like we were meant…
Even though I meant
To wait to become one with him
I didn’t want my journey to be done with him
I didn’t only want to come with him
I wanted to go
But like a thief in the night he came
to rob me of my soul.

The ability to share mind, body, life, and love with someone else is the key to living. It’s how we as human beings evolve. But in order to experience the fullness of what that is like we have to do it God’s way. It was His original plan for man not to be alone and we women were never alone (Genesis Chapter 2 Verse 18). See, when Eve was pulled out of Adam she didn’t know what being alone felt like. She had never experienced not having Adam (Genesis Chapter 2 Verses 21-24). This is part of the reason why women today do foolish things to keep a man around. We came into the world with one! Because of the introduction of sin, our entire reason for being here is thrown off course (Genesis Chapter 3 Verses 1-19). Women are out hunting for men and husbands before seeking God. Men are out looking for Jezebels instead of allowing God to lead them to their wives and we have been tricked into believing that fulfilling fleshly desires are reason enough to go against His word (Proverbs Chapter 5 Verses 1-23). So we dress to seduce. We give in to their sexual desires. Some of us neglect our children who would probably not be here if we had followed God’s plan in the first place (Proverbs 31 Verses 10-31). We have done everything under the sun to entice them when subconsciously all we really want to do is get back to what is natural to us. Get back to God’s original will for us. Don’t think for one second that Satan isn’t well aware of this. He didn’t even have to come like a thief in the night. He looked me dead in the face. And because I was spiritually weak…I came.

Comment by Ernie Mixon on February 13, 2010 at 12:42pm
I love your work.. your a very creative soul... I look forward to viewing more of your writings.