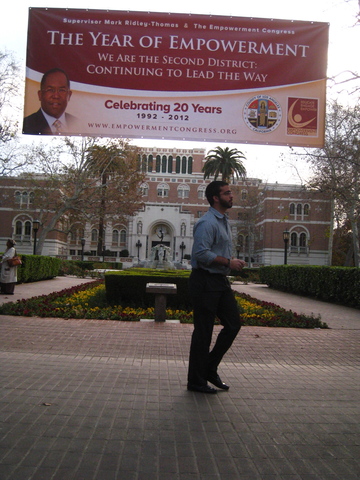 The importance of community and organization at a grass roots level is always the point of the Empowerment Congress, where a few thousand residents gather to learn more about their government.

But the message has a special resonance in 2012. Libya fell. Tunisia fell. Egypt fell. Syria may fall. In places where you have to put your life on the line for freedom, people are standing up. Not just because of oppression or intolerable crimes, but to have a voice, a say in their country. We already have that right. It's free. We just have to use it.

Nearly every candidate for mayor was at the conference, along with Al Sharpton, KCRW's Warren Olney, USC President C. L. Max Nikias and of course Supervisor Mark Ridley Thomas.

Bovard auditorium was packed to capacity so a few hundred of us were stuck outside with the speakers being played on a sound system through the park area of USC.

This was the 20th year of the Empowerment Congress and it was celebrated with music by Bricks and a free lunch after the breakout sessions - where residents could learn more about art programs, economic development and a host of other topics. The sessions gave residents  achance for one-one-one with public officials and a chance to meet other residents who might have similar, goals and interests in improving their communities.

If 2011 shows us anything it was that, we the people, have a lot more power than we think. We have to vote, we have to speak up, we have to stand for what we believe in. We have to work. We have to run for office. We have to elect responsible, caring, intelligent people. Bottom line, it's all within our hands. America is a great country to give us that power. Let's use it.

Thanks to Jethro Rothe-Kushel in Superivsor Ridley-Thomas's office for this video of Al Sharpton's magnificent oratory.

while we are working to become 'empowered'...let's consider being more positive in our thinking and words.

In response to your post a couple of weeks ago:

Re-assessment of the Community Redevelopment Agencies doesn't have to be a 'bad/negative' action. As I understand it, funds were being diverted from schools and public safety needs in order to "SUBSIDIZE" developers to build housing and gentrify our community...THAT is certainly something the Grass Roots organization(s) might consider directing attention.

It's time for us to start working together--OURSELVES--in concert with politicians and bureaucrats to acquire funding and to get work done.

Thanks Yvonne. Great time of year, the beginning.

You captured the sentiments of the day perfectly.