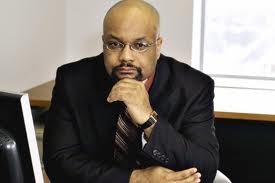 .
"If gay is the new black, then black must have been the old gay . . . I don't really know what that means either . . .
I support gay marriage, but it's mainly because I just don't care one way or the other."
.

The author of the enlightened quotation above is Dr. Boyce Watkins of Syracuse University. He presents himself as a public intellectual and a dedicated civil rights advocate. He’s also the driving force behind "Your Black World," a popular website that seeks to keep Black people politically enlightened. Dr. Watkins goes on to say the following:

"I wonder what it means to simply say that everyone deserves civil rights, and to use that as a blanket justification for gay marriage. So, if I wanted to marry my sister and someone said I couldn't, would that be a violation of my civil rights? I support gay marriage, but it's mainly because I just don't care one way or the other. But if I were deeply religious and considered marriage to be a spiritual union solely designed to be between a man and a woman, I might be offended by someone asking me to support the notion of same sex marriage. Civil rights doesn't mean that every person can do whatever they want, whenever they want with whomever they want. If that were the case, then a mother could decide to terminate her child's life after the baby was born....after all, it's her baby, right[?]"

So-called public ‘intellectuals’ of Dr. Watkins’ ilk never cease to amaze me. I can’t help but wonder how he could possibly have obtained a PhD without ever learning to think? Shouldn’t we be able to expect a PhD, at the very least, to have the intellect to formulate an argument that’s not filled totally irrelevant non sequiturs? Equal civil rights mean that gays deserve the right to marry the one that they love just like straight people. But his response implies that gays are asking for MORE rights than straight people. Therefore, Watkins' response would only be valid if gays were demanding the right to marry their sisters.

So in response to his question, yes, it would be a violation of his civil rights if he wasn’t allowed to marry his sister, but only if others WERE allowed to marry their sisters. The fact that this guy has a Phd and can’t see that the issue of equal rights under the law and his right to marry his sister are far from analogous is a serious indictment against our educational system - after all, he is charged with the responsibility of educating others. But much more important, it’s also clear evidence of the dire need of Americans to become independent and self-sufficient thinkers.

Again, Dr. Watkins presents himself as a public intellectual and a fierce advocate of civil rights, yet, when it comes to the civil rights of gays he’s using the very same kind of irrational argument that racists used to try to block Black civil rights legislation of the past. They’d say things like, "Okay, if we allow a change in the law to allow White people to marry Black people, what’s to stop us from passing laws in the future saying that people should have the right to marry their dogs?"

Both are equally stupid analogies, and although I’ve heard Watkins say outrageous things in the past, for some reason I’m am totally shocked to hear him say something as dumb as this, not only because it's a ridiculous attempt at syllogistic logic - "All dogs have fleas, and my cat has fleas, therefore, my cat is a dog"- but it is equally shocking to see that he fails to recognize the racist history of such a stupid argument.

But what his attitude clearly illustrates more than anything else is that Black people are the product of the very same racist and socially bigoted environment as White people, and as a result, we're just as racist and socially bigoted toward other Blacks and minority groups as any racist Hillbilly. That accounts for much of the flak that Obama is getting from some of Dr. Watkins’ Black colleagues.

While many of these so-called Black "intellectuals" try to cloak their hostility toward President Obama in the language of Black activism, they’re actually upset with Obama for the very same reason that many conservative Republicans are - they consider him ‘Uppity.’ What they’re actually saying is, "Who does this spook think he is, struttin’ around like he thinks he has as much sense as White folks? He’s just another ignorant nigga, just like me." So in short, it’s self-hatred.

For this reason, I’ve dropped all pretense of journalistic detachment on this issue, and I’ve gone on a single-minded mission against these people, as should every journalist, but Black journalists, in particular.  We need to recognize that some things are much more important than some arbitrary rule of journalism about not getting personally involved in a story. White journalists routinely recognize that fact every time this country goes to war, and the fact is, the Black community is now literally in a state of war. It’s currently being besieged by a group of Black, self-serving demagogues that constitute a severe threat to its survival, and we shouldn’t just sit back and let it happen, any more than we would sit back and simply chronicle the events attendant to a drowning child.

In this case, Watkins, this so-called Black "intellectual," has betrayed an attitude toward gay minorities that parallels that of a member of the Tea Party. That should be a call to arms to all Journalists in the Black community who feel a vested interested in the principle of equal rights under the law. At the very least we must start alerting the community of the importance of Black people to start thinking for themselves, instead of relying on self-professed intellectuals to help them formulate their view of reality.

The Black community needs to understand that they should NEVER give anyone else’s ability to think priority over our own, regardless to the hype that precedes the person, or the academic credentials that supposedly attests to the person’s ability to think. Because in many cases, as we saw in the 2000 election that brought George Bush into our lives, the credentials of many ‘intellectuals’ only attest to the fact that they’ve spent so much time learning to regurgitate the thoughts of dead White folks that they’ve never taken the time to learn to think for themselves. . Thus, Black people should always seek to educate themselves, because that’s the only education that we can, unfailingly, depend upon.


Religious bigotry: It's not that I hate everyone who doesn't look, think, and act like me - it's just that God does.