November is full of construction activities along the 8.5-mile Crenshaw/LAX Transit Project and preparation work has begun for the last excavation on the light-rail project on Crenshaw Boulevard between 59th and 67th streets.
Decking and excavation of the cut-and-cover segment will require a full street closure of Crenshaw Boulevard for approximately 40 days. Metro will provide the closure date in advance. However, Metro Construction Relations is already notifying the community to let business owners, residents and property owners know the upcoming construction work is about to begin.
Northern segment
Crenshaw/Expo Station:
Excavation for the underground Crenshaw/Expo Station reached a depth of 65 feet and the contractor Walsh/Shea Corridor Contractors (WSCC) began building the base for the concrete (mud-slab) floor and installing the station waterproofing. Installation of the substation (TPSS) is now taking place.
Cross passage: # 1
WSCC is now working on cross passages two and three, which will be an underground connection between the twin tunnels. They will be located between Coliseum Street and Martin Luther King Jr. Boulevard. The work is being implemented in two phases: 1) the traffic will be pushed back toward the outside lanes (curb), while concrete barriers (K-rails) are placed in the center of the road to allow for the work to take place. 2) The traffic will be pushed to the center of the road, while work is completed on the curb lanes. The work that began Nov. 1 will continue 24 hours a day for approximately the next seven weeks.
Two traffic lanes will be open northbound and southbound on Crenshaw Boulevard at all times. Current parking will not be impacted. Left turns are restricted for northbound traffic on Crenshaw Boulevard onto 39th Street. Pedestrian access will be maintained. Noise from construction activities is being monitored and blankets will be used to mitigate sound.
MKL Station:

Excavation continues to the third and final level of bracing, approximately 55 feet in depth, the total expected depth will be 70 feet.
Cross passage # 5:
The fifth cross passage will be located between Stocker Street and 43rd Street/Homeland Drive. In order to implement this work WSCC has installed K-rail on Crenshaw Boulevard just north of the Bright Now Dental driveway. Work is taking place 24/7 for the next 20 days. One northbound and one southbound lane will be maintained on Crenshaw Boulevard in this segment. Five meter parking spaces will be eliminated. Pedestrian access will be maintained, noise will be monitored and driveway access will be coordinated with residents and property owners near the work area.
Vernon Station:
Excavation continues to the second and final level of bracing, located approximately 45 feet below street level. Once this bracing is installed the excavation will continue to the bottom at 60 feet below street level.
UG4 (south portal):

Excavation and decking of this segment from Vernon Avenue to 48th Street will continue until Nov. 24 at 6 a.m. Work consists of pile installation, completion of the relocation of the 24-inche water line and, of course decking, from south to north.
Southbound traffic on Crenshaw Boulevard is being detoured onto Martin Luther King Jr. Boulevard; however local eastbound and westbound traffic is maintained through 43rd Street/Homeland Drive. West-bound traffic on Vernon Avenue makes a left or right turn onto Leimert Boulevard; 43rd Place is closed at Crenshaw Boulevard and access to 43rd Plaza is allowed via 43rd Street to Degan Boulevard.
Mesa Park Heights:
The segment from 48th Street to Slauson Avenue has seen scattered activity, such as pot holing (detecting location of utilities) and preparing foundation for the traffic light signals. This may change in the next few weeks.
UG3 (60street/67street):
The cut and cover section has begun on the north segment starting with steel pile installation. The work will proceed on Crenshaw Boulevard between 59th Street and 67th Street and includes the installation of 900 steel piles. Steel pile installation will occur during day time shifts, Monday through Friday from 7 a.m. to 3:30 p.m. for the next four months.
Left turns from Crenshaw and into 59th Street are restricted. Noise and vibration is being monitored and driveway access will be coordinated with residents and property owners. Access to emergency vehicles will be maintained.

Guideway segment B-1 City of Inglewood
WSCC continues with rough grading of the at-grade rail track segment along Florence Boulevard between Cedar Avenue and Brynhurst Avenue. The overhead catenary system (OCS) foundations are being installed and fiber optic line is being relocated to allow installation of guideway track and also the pedestrian underpass.
WSCC will continue installing storm drainage in the City of Inglewood at Market Street, Hindry and later at Hyde Park. Work is expected to conclude by the end of 2015.
La Brea Bridge:
The contractor continues building retaining wall structures by backfilling and installing pre manufactured panels and compacting with embankment materials. Bridge and falsework installation continues during November and installation of the superstructure is expected to begin in late December 2015.
Downtown Inglewood Station:
Work for the station has not yet begun, however WSCC is in the process of building guideway walls and bridges with construction of the station scheduled for next year. Concrete crushing operation east of La Brea Avenue will begin in two weeks and should be complete within two weeks.
I-405 Bridge:
All steel piles for construction of the bridge over the I-405 freeway are completed. Contractor will be building footings and columns by the end of the year. The bridge structure will span more than 300 feet and will commence early next year.
Manchester Bridge:
Steel piles for the support of the bridge over Manchester Boulevard have been completed and the contractor will continue to form abutment walls and columns during the next two months.
Southwest Yard:
WSCC continues screening of material (soil) for several of the mechanized stabilized embankments along the alignment.
Century Bridge, Aviation/Century aerial station: 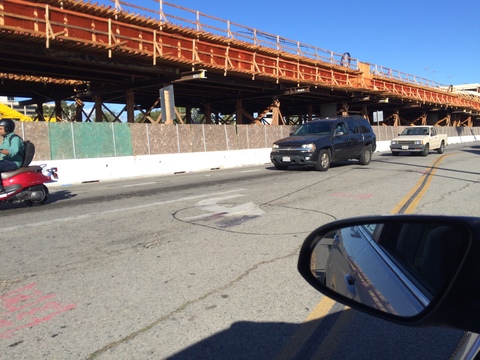 Work to build the falsework and framework for the bridge superstructure at Aviation/Century aerial station continues. Concrete pouring is expected to take place by the end of the year.
UG1 (104th Street to 111th Street)
The support of excavation work along the underground guideway structure between 111th and 104th streets is completed. Contractor continues with installation of walers, struts and lagging within excavation area.
11th Street Bridge: As the pictures shows the abutments are being constructed for the support of the bridge over the structure on 111th Street.
Green Line:
The construction process for the Green Line bridge to connect existing tracks to the new Crenshaw/LAX light-rail line continues. All steel piles and foundations have been completed, and the contractor is in the process of installing falsework for the entire bridge spanning Imperial Highway. Full lane closures are expected on Imperial Highway and Aviation Boulevard with the first taking place on November 16 for the eastbound lanes for 2-weeks, except during the Thanksgiving weekend, and the second full street closure on December 12 the west-bound side also for a 2-week period. Metro Construction Relations will provide in advance the exact date of the closures to the community as they done in the past.
The 8.5-mile Crenshaw/LAX Line is a $2.058 billion light-rail line that will connect the Green Line and the Expo Line. It will have eight new stations to serve the Crenshaw, Inglewood and LAX communities. It is expected to open in 2019.
For more information on the Crenshaw/LAX Transit Project go to metro.net/Crenshaw or join us on Facebook at https://www.facebook.com/CrenshawRail and on Twitter at https://twitter.com/crenshawrail or call the project hotline (213) 922-2736.

What we can't wait to do when the pandemic is over.…See More
Apr 10
1 Comment 0 Promotions

Unity Against Hate at Los Angeles

Join voices to take action against acts of hate on AAPI and all other communities. Take a stand against verbal and physical violence perpetrated on Asian Americans. Together, we will fight and prevail to end hate crimes and discrimination in the…See More
Apr 8
0 Comments 0 Promotions