Playing drums since he was eleven years old, Chukinho has had sticks in his hands for over 40 years. A student of legendary jazz drummer, Hal Blaine, Chukinho was a grounding member in many garage bands in the early 60s. He founded the Virginia/North Carolina-based premiere jazz group “Heroes” in the late 70s. Moving to New Orleans in 1986, he co-founded “Casa Samba,” New Orleans’ first Samba School. After many trips to Rio de Janeiro and Salvador, Bahia, to hone his skills, Chukinho was picked from a handful of non-Brazilian born “bateristias” to accompany the World Champion Brazilian Soccer Team on a world-tour as part of their Samba Band or “Bateria.” 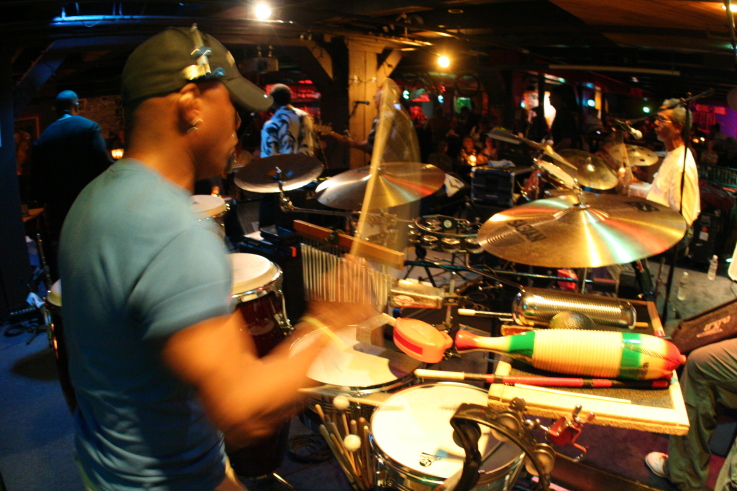 He’s played with some of New Orleans’ greatest musicians and bands including: Dr. John, The Neville Brothers, Sun Ra, Michael Ray and Cosmic Ray, to name a few. He taught Brazilian Drum and Dance, Capoeira and, along with Baba Kenyatta Simon, created the Academy of African Culture at New Orleans Charter Middle School. Since moving to Portland, Chukinho, along with another New Orleans musician, Tom Sandahl, and 5 of Portland’s finest, created the group, Indigo, fusing Brazilian Bossa Nova with Jazz and funk Beautifully.

In 1997, Chukinho was called up to the “Big Leagues” to play alongside his musical heroes and is now a member of the 70’s and 80’s Funk/Soul Group WAR now called The Original Lowriders.

He is a first time author and has written a wonderful story of strength and determination, entitled “Dear Xango.”

Join us as we chat with Chukinho about his music, his book and his Capoeira school for children called Criancas de Zumbi.