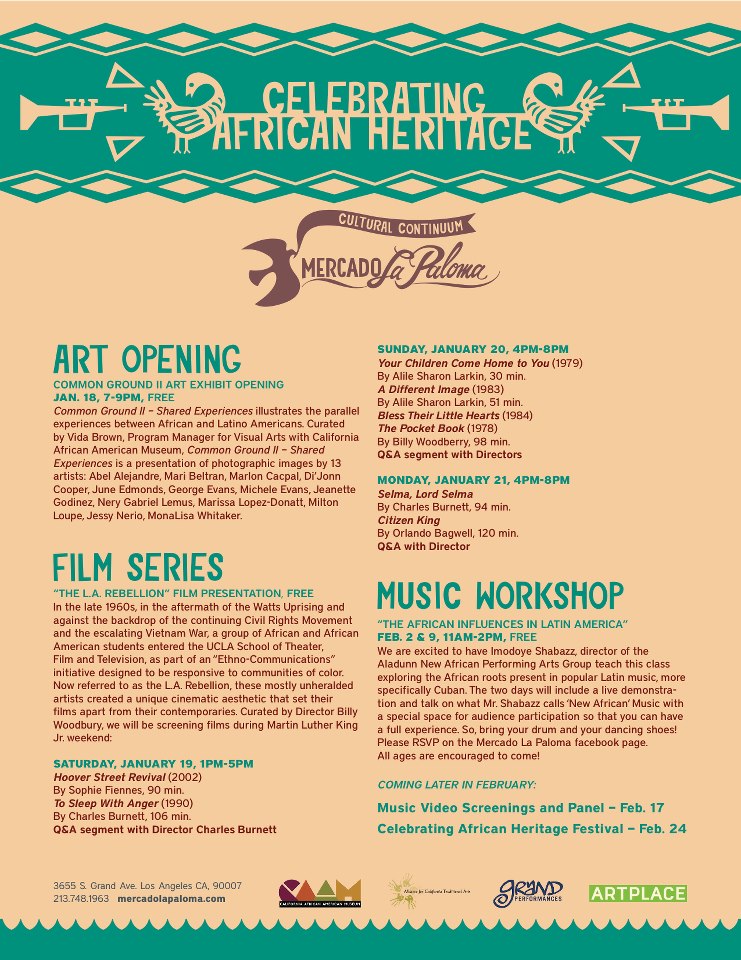 Mercado La Paloma has recently earned a reputation as a foodie destination - as it not only is home to Yucatan-flavored Chichen Itza, but it also spawned Mo-Chica. The food court atmosphere near the DMV just east of USC on Grand Avenue also has a tailor and Mexican gift shop.

And now the business incubator is mixing in art and culture with a new series in January and February to celebrate African heritage.

The Common Ground II Art Exhibition on January 18 from 7pm-9pm. The photo-centric installation will explore the artistic, culinary and cultural dynamics of African and Latino Americans in Los Angeles.

The series will continue with screenings of “The L.A. Rebellion” films to coincide with the Martin Luther King, Jr. holiday weekend from January 19-21. Charles Burnett’s film, “Selma, Lord, Selma,” which chronicles the events of Bloody Sunday will also be screened.

“The African Influences in Latin America” Music Presentation and Workshop are scheduled for February 2 and 9 will be led by performance artist, Imodoye Shabazz, director of the Aladunn New African Performing Arts Group.

In the late 1960s, in the aftermath of the Watts Uprising and against the backdrop of the continuing Civil Rights Movement and the escalating Vietnam War, a group of African and African American students entered the UCLA School of Theater, Film and Television, as part of an “Ethno-Communications” initiative designed to be responsive to communities of color. Now referred to as the L.A. Rebellion, these mostly unheralded artists created a unique cinematic aesthetic that set their films apart from their contemporaries. Curated by Director Billy Woodbury, we will be screening films during Martin Luther King Jr. weekend:

With a Q&A segment with Director Charles Burnett