An Open Letter to Cornel West

Beneath the Spin * Eric L. Wattree
An Open Letter to Cornel West 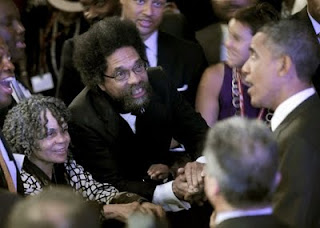 Your explanation for your comment that President Obama is a "Rockefeller Republican in blackface" is as lame and disingenuous a cop out as I've ever heard. You claimed that your critics are trivializing your comment by not getting to the core of your assertion, which was President Obama is a "Rockefeller Republican." Then YOU tried to trivialize the significance of the addendum, "in blackface," as though it was meaningless, by saying, "I have a black face, you have a black face, my mother has a black face," etc.

Well, if you know that the phrase "in blackface" is going to distract from the core issue, why don't you stick to the core issue and stopping adding such racially offensive language? Could it be for the publicity? I think it is, and your cavalier attitude in this matter speaks volumes. Obviously, you're passionate craving for publicity and promoting the Smiley/West Corporation takes precedence over whether or not you offend the Black community.  So it seems that your infamous "love for your people" stops at your pocketbook.

You’re not a complete idiot, so you know full well that the addendum to your comment was drenched in racial innuendo, and you've become a serial offender in that regard. You know very well that the phrase, "in blackface," conjures up images of White minstrels portraying Black people by painting their faces jet black, with huge oversized white lips, then running across the stage shouting, "mammy!" So the subtext of your comment was clear - you think President Obama is a White clown beneath a painted blackface. That’s a grossly racist and disrespectful statement to be directed at anyone, and particularly the President of the United States. Who do you think you are!!?

Then just as bad, and just as disrespectful - this time, however, directed at the entire Black community - you have the unmitigated gall to now come on this show, and in your most self-righteous and condescending tone, try to tell Black people who took issue with your comment that they’re just being silly for objecting to your blatantly racist statement. In other words, we’re too stupid to know a racist comment when we hear one.

Cornel, you’re indulging in the exact same kind of racist act of conflation as any vicious, petty, and unrepentant bigot. You know the kind - the ones who go on Fox News and talk about "Welfare Queens," when everybody in the world know they’re actually talking about black women in general; or say, "We’ve got to do something about crime," when they actually mean, it’s time to start brutalize and killing more Black men. Then when they’re confronted with it, just like you, they say, "Ooooh, where did you find that race card? That wasn’t what I meant at all!"

So "brother," you ain’t foolin’ nobody. The depth of your self-serving racist behavior would make Jesse Helms blush.

And regarding this so-called "Poverty Summit" at the White House that you and Tavis are calling for. I assume you and Smiley expect to attend to advocate on behalf of "the people." Well, I have one question - what people? No one elected you and Tavis to represent the Black community, and we don't need you to speak for us.

The Black community is communicating with the White House on a daily basis through thousands of letters, emails, phone calls, and our ELECTED officials. In addition, we just touched base with the president through the polls in the last election. So the president undoubtedly knows more about what's on the mind of the Black community than you do - that's how he knows you're irrevelant.

So is this so-call summit that you two are calling for designed to help the poor and Black community - after all, you've never done anything for us before - or is it actually about shining a national spotlight on a group of nonproductive, loudmouth, egomaniacs who crave national attention? If your history is any indication, I'd say the latter. So here's a news flash. Your time has passed, and the Black community is sick to death of you. So please, go away and let us handle our busines.

Citizens Against Reckless Middle-Class Abuse (CARMA)
Religious bigotry: It's not that I hate everyone who doesn't look, think, and act like me - it's just that God does

DojO- commented on DojO-'s blog post CNN TV: Schedule / Wkdaze - June, Mon. 14th thru Fri. 18th PT; NEWs + A Radical Rebellion / "Super Regular Weekly Programin' " *updatez*
"  1st state to shut down in the US fully reopens - A grand reopening is underway in the 1st state to have shut down due to Covid-19. Here are California's new rules.; US reaches 600,000 Covid-19 deaths as new, dangerous variant…"
4 hours ago