We are honored to have Anita Long as a member of our ColoredPeople network. She is Huey Long's Daughter and the Ink Spot's Museum's curator. Anita invites you to attend a Tribute to her father at the museum on August 1, 2009.

Huey Long was a native of Sealy, Texas and enjoyed playing the Ukulele. In 1925 he was shining shoes outside the Rice Hotel in Houston when the banjo player for the Frank Davis Louisiana Jazz Band did not show. Long jumped at the chance to fill in where in the past he only had the opportunity to announce the bands. His life was forever changed as he found himself playing in the band with Frank Gibbs on trombone and Punch Miller on trumpet.

In the 30s he migrated to Chicago and with his new instrument, the guitar, he played with Texas Guinan's Cuban Orchestra under the leadership of violinist Clarence Eddie Moore.

In 1935 Long was an assistant arranger to Zilner Randolph, who had the WPA Concert and Swing Band. In 1936 Long did studio work with Richard M. Jones and his Jazz Wizards when four songs were recorded under the Decca label: "Blue Reefer (Tin Roof) Blues, Muggin' The Blues, Bring It On Home To Grandma, and I'm Gonna Run You Down." In same year, he teamed up with Lil Armstrong and also under the Decca label they recorded "My Hi-De-Ho Man","Or Leave Me Alone", "It's Murder","Just For A Thrill", "Brown Gal", and "Doin' The Suzie Q". In 1937 he joined Jesse Stone's orchestra, "Chicago". (Stone is the composer of the 1954 "Shake, Rattle & Roll.")

During 1939-41, still in Chicago, he was a member of Johnny Long's Gig Band, featuring the great Joe Williams and on occasion, Dorothy Donnegan on piano and for a brief time, he replaced John Collins when he joined Fletcher Henderson at the Sunset Cafe. In 1942 he moved to NYC where he Joined Earl "Fatha" Hines and played with legendary Dizzy Gillespie, Charlie Parker, Sarah Vaughan, Billy Eckstein, Budd Johnson.


In 1943 Long had formed his own trio which were regulars at the Three Deuces Cafe on 52nd Street and in 1944 he and Herb Kenny were invited by Bill Kenny to join the Ink Spots. Long would be replacing guitarist Charlie Fuqua and songs such as "If I Didn't Care","I Don't Want to Set the World on Fire", "Java-Java", "My Prayer", "Street of Dreams" "To Each His Own", "When the Swallows Come Back to Capistrano", and many other songs featured Long's guitar intros and vocals. He also recorded several songs with the group, including “I’m Gonna Turn Off the Teardrops,” “I’ll Lose a Friend Tomorrow,” “The Sweetest Dream” and “Just for Me.” He left the Ink Spots in 1946.


In the 50s Long was a member of the Snub Mosely band and in 1953 he took his own trio on USO tours. In 1955 he moved his family to California and attended Los Angeles City College and majored in music. In the meanwhile, the Ink Spots had broken up and various groups were forming using the same name but with no connection to the original group. In 1960 Long formed his own "Ink Spots" with Orlando Roberson, Adriel Mac Donald and Walter Springer and for two years performed in California as a singer and guitarist.

In the late 60's he returned to New York, played with singer Margo Richards and in 1965 he opened a music studio in the CBS Building, formerly the Ed Sullivan Theatre and was there for ten years working as a vocal coach, writing and playing on occasional engagements.

Long lived in NYC for 50 years and was also a piano player, but guitar was his signature instrument.

Huey Long had three children while in New York and his wife Louise Long, who he met in Chicago in the 30s, was a journalist and one of the first writers for the New York Defender. Anita and her mom have their works published at the Library of Congress and Anita has fond memories of her mother being an activist and fundraiser benefiting the community. "Mom was a great supporter and influential in my dad's life." 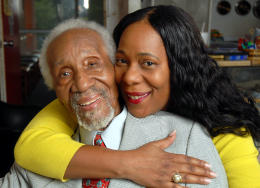 Anita says her dad was a supporter of her singing and she comforted him by singing to him "If I didn't care" and "Amazing Grace" on his final day.

He is survived by daughter, two sons, and seven grandchildren.

The Ink Spots - If I Didn't Care From the late 30s to the early 50s the original Ink Spots were one of the most popular and influential singing groups of the time. In 1939 "If I didn't care" was the Ink Spots' first million selling record ultimately selling 19 million copies.

The group was originally formed in Indianapolis in 1931 and first members were Orville "Hoppy" Jones (Cello as stand up bass), Ivory "Deek" Watson (Guitar and Trumpet), Jerry Daniels (Guitar and Ukulele) and Charlie Fuqua (Guitar). The Ink Spots were inducted into the Rock and Roll Hall of Fame, as influences, in 1989; this induction consisted of Bill Kenny, Charlie Fuqua, Deek Watson, and Hoppy Jones and in 1999 the group was inducted into the Vocal Group Hall of Fame.

Lamonte McLemore, the creator of the vocal group the 5th Dimension and also a member of ColorePeople.net, was the nephew of Bob Benson, the group's pianist/arranger 1938/40 and the first Ink Spots to pass away.


The Ink Spots Museum website - Be sure to visit the website featuring Huey Long, the last living member of historic 1930's vocal group which helped build a foundation for the future of Rhythm and Blues.

You are invited to donate to Huey Long's Memorial Fund and as a thank you for your generosity, Anita will send you one of Mr. Long's photographs. Please visit museum's site for more details.

BROADCAST CORRECTIONS 7/4/09: Long had four children and was survived by his daughter and two sons. "If I didn't Care" was first 1 million seller as a single for there were no albums at the time.

This show is sponsored by DaughterNature.com

The Music Center’s Dance DTLA series is back for a full season of dancing under the stars on Jerry Moss Plaza at The Music Center most Friday nights this summer! Eventgoers can dance the night away to various dance styles from June 3 through…See More
16 hours ago
0 Comments 0 Promotions