A Glance at Destiny

A Glance at Destiny 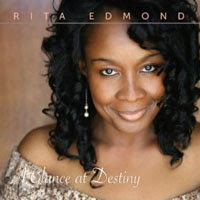 Since this is political column I rarely use it to discuss anything else. But when I come across exceptional excellence I feel obligated to bring it to your attention. In this era where glaring mediocrity has become the standard we expect, unfettered excellence is a political statement in itself, and Ms. Rita Edmond speaks volumes in that regard.

Several weeks ago I was in Leimert Park when a friend and fellow sax player came up to me and said, "Man, you've just got to hear this singer. She's going to blow you away." So we went to his car and he played the CD. He chose the tune, "You'd be So Nice to Come Home to," from her CD "Sketches of a Dream," and he was absolutely right about her impact on me. She literally blew me away.

I'm a very cynical sort when it comes to music, so while I should have known better, considering the taste of the gentleman who brought Ms. Edmond to my attention, I was expecting to hear just another one of the hordes of singers with a pleasant voice. But before this lady got through the first chorus of the tune it was clear to me that this wasn't just another good signer. This lady is special. The experience of hearing her for the first time can only be compared to the first time I heard, and really understood, Ella, Sarah Vaughan, or Dinah Washington. The only difference was, this time, I understood the importance of what I was hearing. It was an experience that I will never forget - and please believe me, this is not hyperbole; I'm dead serious.

Before Rita could get to the first bridge of the tune I told my friend that I've got to have this CD. But when he started telling me where I could pick up a copy it became clear that he didn't understand what I was saying, so I had to make myself clear. "No. You don't understand. I want THIS copy." Fortunately, being the good natured fella that he is, he caved in and sold it to me.

Being a musician I'm sure he understood instinctively that I didn't want to share the experience of my first encounter with this very exceptional woman with him or anyone else, and he was right. Immediately after purchasing the CD I went to the park, parked under a shade tree and listened to it in its entirety, and that's when my musical love affair began.

It turned out that the tune that first got my attention wasn't even my favorite tune on the CD - in fact, I really can't tell you which tune is my favorite. There are no fillers on the entire CD. Any tune on the CD could very easily have served as the title song.

The entire CD is flawless. For weeks I woke up listening to it, and being the night creature that I am, I'd take a sip of dinner out on my patio and listened to it from 3 a.m. in the morning until the dawn. Then once I was sure my neighbors were awake, I'd take out my horn and play along with it until I became exhausted. Musicians will immediately understand where I'm coming from, while I'm sure the civilians among you will think this a bit excessive. But those are the facts, and I'm not exaggerating one bit.

Now Ms. Edmond has come out with another CD, "A Glance at Destiny," and it's just that. I love this one even more than the first, if that's possible. Hearing her sing "Sonny," "You've Changed," "Gentle Rain," "Just Friends," and "You don't Know What Love is" will surely be a delight for every committed jazz fan, because they remain true in the depth, feeling, and artistry of the originals in every way.

But this CD is not just a walk down memory lane for we old fogies. Ms. Edmond is also extremely contemporary, so "A Glance at Destiny" will also serve as an excellent primer for those who simply love beautiful music but don't really understand what jazz is all about. If you happen to be one of those people, pick up this CD and broaden your horizons. Be schooled by one of your own. Ms. Edmond is of the hip hop generation, so she understands and appreciates hip hop as well, but jazz just happens to be her thing.

And one more word to the jazz purists. This is not one of those take-off CDs where you have studio musicians doing their interpretation of what jazz is suppose to sound like. This is the real deal. Rita's accompanied by Ricky Woodard on sax, Nolan shaheed on trumpet, Z. Sean Johnson on flute, Greg Poree and Jaques Lasure on guitar, Llew Matthews and Joel Scott on piano, james Leary and Edwin Livingston on bass, and the illustrious Tootie Heath of the world renowned Heath brothers on drums. You don't get no more legit than that.

Tootie Heath's presence alone should say it all. He and his brothers, Jimmy and Percy , are as much a part of the jazz aristocracy as Miles Davis and John Coltrane. And Ricky Woodard's solo on "Gentle Rain" reminded me why I'm sitting here writing and not playing sax for a living.

Finally, I mentioned that Ms. Edmond's excellence also represents a political statement, and nothing is more representative of that fact than her rendition of "Here's to Life." Rita Edmond is a relatively young woman, she's probably young enough to be my daughter. But the artistry, passion, and sensitivity that she brings to that tune simply has to involve the hand of a higher power.

I'm not very big on metaphysics, so while my common sense tells me that Rita wasn't even born during the struggles of the 60's, my stubborn heart says, "Don't be a fool, Eric. Listen to that woman! She's been here before - case closed." I'm feeling a little silly, but the more I listen to Rita sing, the closer I come to caving in to that argument. So I say again, Ms.Edmond's rendition of "Here's to Life" is THE most passionate and heart wrenching performance that I have ever heard by ANYONE, doing any song - ever:


"No complaints, and no regrets. I still believe in chasing dreams and placing bets. Yet I've learned that all you give is what you get, so give it all you've got.
I've had my share; I've drank my fill. And even though I'm satisfied, I'm hungry still. To see what's down another road beyond the hill, and do it all again.
So here's to life, and every joy it brings. So here's to life, to the dreamers and the dream."

So has Ms. Edmond been here before? I don't know. But I do know this - she sings with a vision, polish, and a smooth matter-of-fact deliver that's far beyond her years. So give her a listen, then you tell me if this is her first time around. You just might be surprised at your own answer.