"More Than a Riot: The Joyce Ann Gaines Story" screening 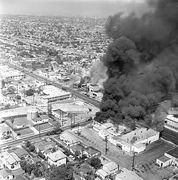 The Mayme A. Clayton Library and Museum, in association with the Watts Towers Arts Center, will be commemorating the 50th anniversary of the 1965 Watts Riots with a variety of programs in August. Here is an opportunity to revisit the uprising and learn from its aftermath as America in 2015 continues to struggle with the prevalence of African American victims of police brutality, demands for civil rights and equal justice, and institutional racism.

WHAT DO YOU REMEMBER?

Were you in Southern California in mid-August 1965? Do you remember the Watts Rebellion? Tell us about it.

Email your story, along with your name and telephone number, to maymeclaytonpr@gmail.com

Followed by a Reception

RSVP for "More Than a Riot: The Joyce Ann Gaines Story" screening to add comments!

In partnership with the City of Malibu, West Basin Municipal Water District is hosting a firescaping webinar on Wednesday, September 15, 2021 at 6:00 P.M. to help residents learn landscaping and irrigation techniques to safeguard…