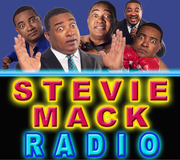 Twenty-year veteran of the industry, Jeff Clanagan is a television and film producer at the forefront of the independent film and stand up comedy business. Clanagan has produced a hit slate of stand up comedy specials which have premiered on networks such as HBO, Showtime, Comedy Central, and BET and have thrived in the DVD marketplace.

Comedian Stevie Mack is the Writer/Host of the Number One Online Comedy Talk Show!

DojO- commented on DojO-'s event National Doctors' Day Mar. 30th 2020
"WASHINGTON, March 30 (Reuters) - Americans need to press on with efforts to contain the spread of coronavirus to start seeing the rates of infection come down, a top U.S. health official said on Monday after President Donald Trump extended a…"
6 hours ago

Join CNN Chief Medical Correspondent Dr. Sanjay Gupta for the latest news about the coronavirus. He'll make sense of the headlines, speak w/ the experts & give you all the information you need to stay safe &…