BING BING TO WALK FROM ALTADENA TO GARDENA IN ATTEMPT TO UNIFY PASADENA'S MUSIC SCENE. SAYS HE WILL WALK FURTHER THAN THE LOS ANGELES MARATHON. 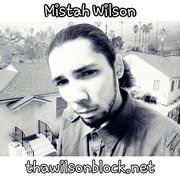 Pasadena, Ca artist Bing Bing, also known as Mistah Wilson, has been making ambitious moves for the Pasadena Music Scene and it's respective artists. On Sunday October 6th, 2013, he literally walked from Hollywood & Vine to La Brea & Centinela promoting the Pasadena Music Scene. Something he didn't plan on doing until the morning of.

"I just had to prove to myself that I can go the distance," says an exhausted Bing Bing. "I feel like I've set a record. Raised the bar. Now that I know I can do it myself,  I'm currently making plans to walk from Eliot Middle School in Altadena, Ca to Gardena High School in an attempt to unify Pasadena's music scene and bring it together in a real way," adds Mistah Wilson. Bing Bing attended Gardena High School in the 10th grade in 2005. The high school sits on the southeastern-most part of Gardena, Ca. "I use to get dropped off at Gardena High School in the morning, turn around and catch the first bus smashing to Pasadena. I was already expelled from Pasadena High School at this time," the young aspiring artist says as he discusses why DENA means so much to him as an individual. He went on to talk about how being involved in all three cities in Los Angeles with 'dena' (Gardena, Pasadena, Altadena) in the name has impacted his life growing up. And so he plans on going from Altadena through Pasadena and all the way to the bottom of Gardena. "I'm going to do it for all Pasadena/Altadena artists to see. This one is going to be for them. Because I don't appreciate not being taken seriously after the community services I have provided from the bottom of my heart. I am a leader. And I believe in leading by example."

RSVP for BING BING TO WALK FROM ALTADENA TO GARDENA IN ATTEMPT TO UNIFY PASADENA'S MUSIC SCENE. SAYS HE WILL WALK FURTHER THAN THE LOS ANGELES MARATHON. to add comments!